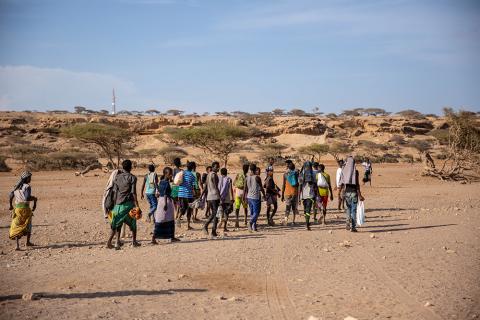 Nairobi – Nearly 400,000 migrant movements were recorded in Djibouti, Ethiopia and Somalia during the first six months of 2018 – an average of 2,000 or more individuals per day.

It is an active migration zone, characterized by what is considered “mixed” migration – or the movement of different population groups for a variety of reasons.

A slim majority (51%) of these individuals are moving from, but also within, the Horn of Africa, followed by about 35 per cent whose movements are towards the Gulf Cooperation Council countries on the eastern route – through Djibouti, Somaliland and Puntland.

Smaller movements are being tracked along the Southern Route (to South Africa) and the Northern Route (to Egypt and Israel), about 8 and 5 per cent, respectively.

IOM also recorded over 50,000 arrivals in Yemen during the first half of 2018, which is consistent with the 90,000-100,000 rates of arrivals from Africa annually to Yemen during recent years.

These are a few of the findings detailed in a new report, entitled A Region on the Move, that provides mid-year trend analyses of the main events and key population mobility patterns across the East and Horn of Africa (EHoA) region.  The report provides evidence-based insights into major displacement crises and migration trends observed during the first six months of 2018.

Among the major highlights:

These and other trends in migrant movements are studied by the Regional Data Hub (RDH) for the EHoA, established at the beginning of 2018. The RDH aims to support evidence-based, strategic and policy-level discussions on migration through a combined set of initiatives that build on IOM’s extensive migration portfolio in the East and Horn of Africa region. This includes establishing a baseline for regional migration flows, increasing information management capacity across countries to strengthen data consolidation, quality control and conducting research on mixed migration to publish timely and relevant reports and trend analyses.

Commenting on the operations of the RDH, IOM Regional Director Jeffrey Labovitz said: “The data hub is a flagship initiative to inform practitioners and partners on mobility. We saw a gap in the consolidation and dissemination of information and our aim is to provide a reference point in the region on migration.”

The cornerstone of the RDH is the Displacement Tracking Matrix (DTM), used by IOM to regularly track and monitor displacement and population mobility, as well as provide critical information to decision-makers and responders during and in the aftermath of crises, and contribute to a better understanding of population flows. In the EHoA, the DTM is implemented across six countries: Burundi, Djibouti, Ethiopia, Somalia, South Sudan and Uganda. It has the widest coverage of primary data collection on internal displacement and migration in the region.

Funding for the RDH was largely provided through the EU-IOM Joint Initiative for Migrant Protection and Reintegration in the Horn of Africa. More commonly known as the ‘Joint Initiative’, the project facilitates orderly, safe, regular and responsible migration management through the development of rights-based and development-focused procedures and processes.

The Joint Initiative, backed by the EU Trust Fund for Africa, covers and has been set up in close cooperation with a total of 26 African countries.