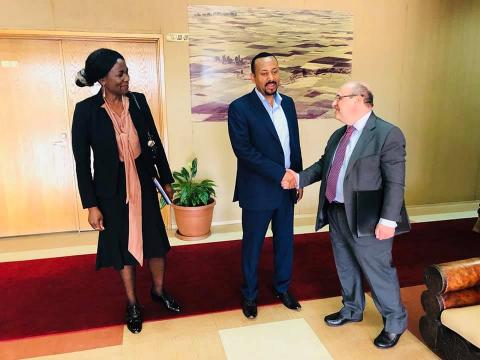 Addis Ababa – The Director General of the UN Migration Agency (IOM), H.E. António Vitorino, met with the Prime Minister of the Federal Democratic Republic of Ethiopia, H.E. Dr. Abiy Ahmed, and with H.E. Moussa Faki Mahamat, Chairperson of the African Union Commission (AUC) in Addis Ababa on 27 and 28 October 2018, respectively.

In his meeting with H.E. Dr. Abiy Ahmed at the National Palace, the IOM Director General congratulated the Prime Minister on his robust reform agenda, for making peace with Eritrea and advancing women’s leadership in politics. Ethiopia’s newly constituted cabinet comprises 50 per cent women and stands out as the only country on the continent with a female president following the recent appointment of H.E. Sahle-Work Zewde on 25 October 2018.

For his part, Prime Minister Dr. Ahmed expressed appreciation for the contribution of IOM in Ethiopia in response to the recent spate of displacements in the south-west of the country, and in enhancing capacities for effective migration governance in Ethiopia. He further expressed the need for support in the area of job creation for the youth – a pressing priority of his government.

The IOM Director General subsequently met with the African Union Commission Chairperson, H.E. Moussa Faki Mahamat, at the African Union headquarters, along with commissioners Amira El Fadil Mohammed and Minata Cessouma Samate. The meeting covered a broad range of areas of ongoing cooperation between the AUC and IOM, discussed potential additional areas for partnership going forward, and went on to underline the importance of AU leadership on African migration challenges