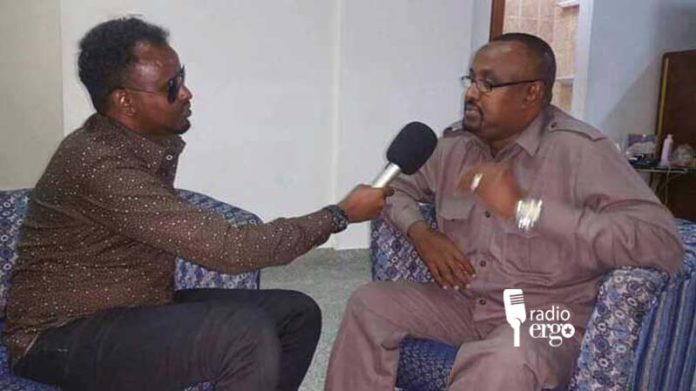 The outbreak of civil war in Yemen in 2015 turned the tide for the roughly 250,000 Somalis who had fled Somalis conflict in the 1990s and made Yemen their second home.

The Somali embassy in the Yemeni capital Sana’a has been working with the UN refugee Agency (UNHCR) to respond to the plight of Somali refugees now stranded in the warn-torn nation.

At the time of the interview, the ambassador was visiting Al-Kharazrefugee camp, which is home to thousands of Somali refugees.

Reporter: What was the purpose of your tour to this camp?

Ambassador: My aim was to conduct an assessment and to meet with Somali nationals living in this town of Kharaz, to understand their situation. I also want to get first-hand information about the living condition of the Somali people.

Reporter: What is the total number of Somali refugees living in this country?

Ambassador: We estimate there are between 120,000 and 150,000 refugees. The majority of these people live in the northern parts of the country while others live in other towns.

Reporter: How was the situation of Somali refugees you met here?

Ambassador: The situation of Yemen is generally not good as there is an ongoing war. You can guess what the situation of a foreigner could be when he is in a country which is at war with itself. However, the situation of these people is not as bad as I thought though there remain challenges that need to be addressed.

Reporter: How have Somali refugees been affected?

Ambassador: The situation is still ongoing, and we have had casualties among Somali refugees as a result of the war. Since the start of the war, the death toll of Somali nationals has reached 400 and many more were injured.

Reporters: Did you discuss with the (Yemeni) government and other rival groups about the Somalis killed in the war?

Reporter: What support have you been able to offer to Somali refugees?

Ambassador: We have provided a range of support including solar power installation. There was insecurity in Basat, where many Somalis live. Armed gangs used to attack the area and harm the refugees. To address this, we sought help from the NGO, ADRA, which helped us get 200 solar panels for the area. We installed them and this has played a role in securing the area. We also met with the UN team and asked them to drill wells for those people. The UN pledged to drill three wells.

Reporter: What can you tell us about the repatriation process and how is it working?

Ambassador: That process has not stopped. Initially, people registered to be repatriated used to get no money, but after a long struggle and meetings with the UN, the UN agreed to give every returnee $250 on departure and an additional $200 upon arrival in Somalia.

Reporter: How many people have been repatriated to Somalia so far?

Ambassador: We have repatriated 3,500 people in the last one and a half years.