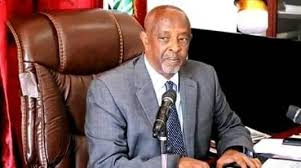 The minister in charge of Somaliland’s home affairs has confirmed that there was a man hunt operation that was taking place in the country ever since the killing of two police officers occurred.

The interior minister, Hon. Mohamed Kahin Ahmed has made the remarks at a press conference held at the ministry of interior complex on Saturday.

The minister has confirmed that 3 people who killed the police officer in line of duty are in government hands.

He also went on to say that at least 10 people who either aided or abetted the culprits and the perpetrators of this barbaric murder are in also government captivity.

Police are interrogating the people who have been arrested in connection with deliberating killing of two police officer killed in action.

The minister has also revealed that the government has seized vehicles that the assailants have conducted assassination.

Mr. Kahin has disclosed that there are 4 vehicles that have been confiscated while another vehicle which was in support of the coordination during the operation has been seized.

The minister promised that all the people who in detention will stand trail for the killing of the two innocent police officers.

The interior minister has added that it will have a huge impact on the stability and security of Somaliland.