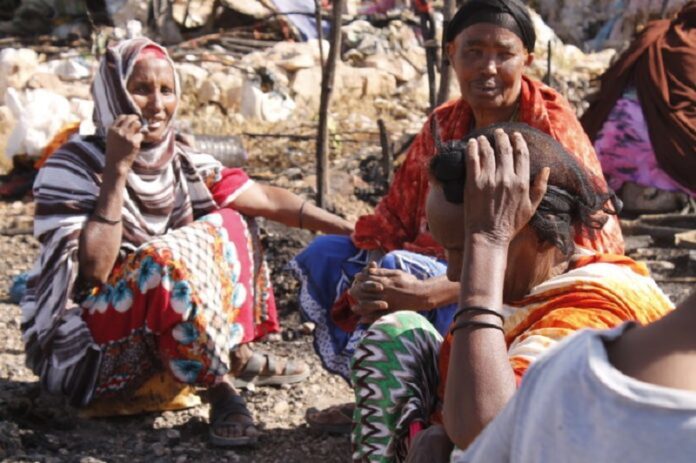 Somaliland firefighters have trained 300 people, including 210 women, on preventing and tackling fires in two large IDP camps outside the Somaliland capital, Hargeisa. Nasa-hablod A and B camps have suffered at least five major fires in the last two years, causing loss of life and property. The camps are highly at risk of fires due to the makeshift dwellings, made out of wood, plastic and cloth. Fires tend to spread fast, especially during the windy seasons.

Sahro Hassan Guled’s 65-year-old sister died in a fire while preparing cloth materials to put on the roof of her hut. “I’m still traumatized by that fire. It started late at night and spread very quickly. There was chaos, confusion and loss all around. We were running around like crazy people, dashing over here and there. Some were scrambling to save their possessions, others could only manage to hold on to their kids and get to safety,” Sahro told Radio Ergo.

Hawo Ibrahim Said, a mother of six, lost all her possessions in a fire in the camp. She told Radio Ergo that she took part in the fire management training because she wanted to be better prepared in future. “I was ignorant before, but the training has given me many skills. I’m now equipped and ready,” she said.

With support from the NGO, SOS Children’s Villages, the Somaliland Fire Brigade and Rescue Service trained the IDPs on ways of putting out fires, including using wet blankets and fire-extinguishers. Abdiwahab Osman Jama, a communications officer with the service, told Radio Ergo that the trainings focused on prevention and management.

“We wanted them to understand how fires start, what causes fires, how to prevent them, and if they do occur how to manage the situation until firefighters come to the scene,” he said.

Fifty fire extinguishers have been placed in key sites around the two camps. Selected individuals were trained on how to use them. Safiya Abdi Hussein, a mother of five and a member of the camp management committee, told Radio Ergo that the last fire destroyed her small kiosk that provided income for the family. She was among the trainees.

“The painful experiences of the past have made us keen to learn more about fires and how to protect ourselves from disaster, at least until the firefighters come,” she said.

Nasa-hablod A and B camps on the northern tip of Hargeisa have been hosting 1,600 displaced families for the last 10 years. Most of the families are pastoralists who were dispossessed by drought, but some poor families from the host community have also joined the camps home in order to get humanitarian assistance.