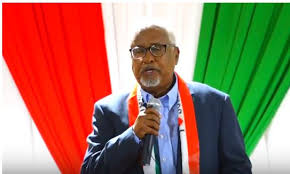 The acting chair of Wadani party in Somaliland repudiated that he harbors ill will against president Bihi and the home affairs minister, Kahin. He said that there is respect among the three of us but we have a political difference and that should not be perceived as resentment.

Mr. Abdikadir Ismail Jirde made the remarks at an event held in London yesterday which saw the attendance of the three political party officials. Mr. Jirde cleared a lot of misconceptions among the populace by saying that the parties have disagreement over the best way to lead the state.

He promised to have that political difference of opinion and further said that it is all about leveling criticism and contesting in politics but that the public should not interpret as a personal rancor. Mr. Abdikadir went on to say that whenever he meets with the duo that they rose from sitting in order to salute him and this will be seen as homage among us. He told the diaspora community not to confuse with Somaliland politics once the government and opposition trade accusations via the local media outlets. Mr. Jirde added that this the game of politics whereby the parties, the parliament and the government exchange their stances but you see on occasions that they have tea together and laugh together. Somaliland embraced the multi party politics so that the citizens should join the party they wish but that should not create acrimony among the public.