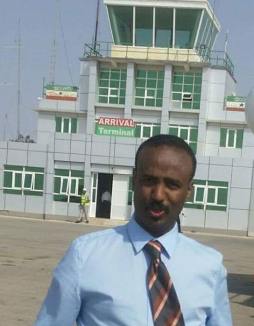 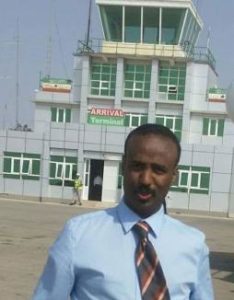 Mr. Abdiasis took a picture at the airport tower before he was sent off to Mogadishu

HARGEISA– Somaliland immigration authorities yesterday denied entry and deported to Mogadishu the former spokesman of Somalia’s foreign affairs ministry. He was denied entry into Somaliland after he landed at Egal International airport and told immigration officers that he was invited to Hargeisa.

Mr. Abdiasis Ali Ibrahim a.k.a “Hildhiban” was recently sacked as the press secretary of Somalia’s ministry of foreign affairs, a post held for quite some time. Police immigration officers have told him to board a plane bound to Mogadishu after he lied about his visit to Somaliland. He protested against his deportation back to Mogadishu claiming that he is a Somali by birth. He was told either to be detained in Hargeisa or being deported and then he decided that he should return. Mr. Abdiasis has posted his facebook account that he was leaving for Hargeisa, citing that it is part and parcel of the territory of the republic of Somalia. He further cited that he received an invitation from the Somali people living in Somaliland. He declined to further reveal the individuals that extended an invitation to him so as to come to Somaliland. SL immigration authority did not speak of the deportation claims by former foreign affairs ministry spokesman of Somalia. There is a bar in place which all Somaliland presidents executed which stipulates that Somali officials won’t set foot in Somaliland and face expulsion from their soil.