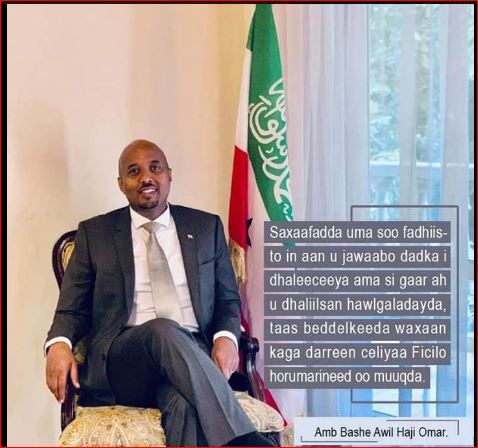 For 30 years now, Somaliland has been pushing for international recognition after it disengaged from the unity with Somalia when the war broke out in 1991. It has been 30 years of toiling by the Somaliland people to pick up and rebuild their country from the rubbles occasioned by the war.

While our neighbours Somalia continue to be ravaged by instability, Somaliland has enjoyed peace and tranquility devoid of the insecurity that affected the region.
The government and people of Somaliland rate democracy very highly and while neighbouring countries are ruled with an iron fist, the same cannot be said of Somaliland which has been holding peaceful presidential elections over the years.

Thanks to this democracy and peace, the country is attracting globally respected companies. The expansion of the Berbera Port, a joint venture of the government and the DP World, is perhaps one of the biggest investment projects carried out in the country.
DP World invested 442 million US dollars to turn around the hitherto sleepy Port of Berbera to a world-class facility that will serve the country and the entire Horn of Africa region and beyond.

Further, the building of the Berbera Economic Zone will provide local and foreign investors with a conducive and competitive environment for investment and trade through readily available infrastructure including pre-built warehousing facilities, serviced land plots, and office and business centre spaces.

The opening of the refurbished Berbera International Airport marks another huge milestone for Somaliland and hands the country an opportunity to gain a slice of the growing aviation earnings in the region.
With a large number of commercial vessels plying between Asia and Europe, passing through the Red Sea and the Suez Canal, Somaliland stands to benefit from an Exclusive Economic Free Zone next to the Berbera port and airport, forming a gateway to commerce with the landlocked Ethiopia and other countries.

But it is not just Berbera that is seeing expansion. There are companies that are focusing on the country’s potential in oil and energy. Among firms involved in the oil and gas exploration in Somaliland are Genel, an oil company with a registered office in Jersey and field office in Turkey and United Arab Emirates-based RAK Gas company.

With such investments from foreign companies, young Somalilanders have been able to access employment while the economy of the country has continued to grow.

Curiously, all this is happening yet Somaliland, unlike other countries, does not get foreign aid from financial institutions like the World bank, the IMF or even closer home, the Africa Development Bank. Removing this political obstacle that is denying Somaliland access to funding from these institutions should be a top priority of the government.

But the government also needs to look at other mechanisms of building the economic capacity of the country as it pushes for recognition.
Setting up a Somaliland Investment Fund which will create opportunities to develop the country’s resources will ensure creation of more jobs and encourage young graduates to live and work in the country rather than abroad.

It will also bring back Somaliland nationals in the diaspora to invest in the country because the government will have created the right environment for investment.

And with the world opening up and countries like Barbados getting independence from the United Kingdom, the United States warming up to working with Taiwan, the International community should now remove restrictions and policies that have hindered Somaliland from receiving funds and grants directly.

With Somaliland playing a big role ensuring there is security in the Red Sea by working with other countries, it is now time the international community reciprocates by helping to build the country economically.

Mr Bashe is the immediate former ambassador of Somaliland to Kenya