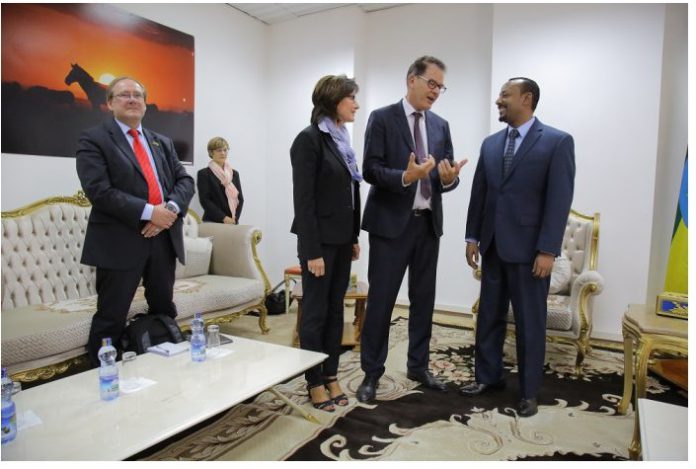 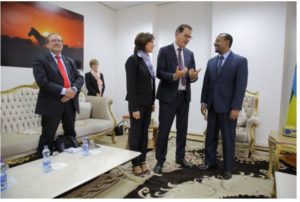 Addis Ababa August 24/2018 Germany has appreciated the rapprochement reached between Ethiopia and Eritrea and expressed desire to provide more support in the area, said German Minister.

Minister of Economic and Development Dr. Gerd Muller told ENA following his discussion with Ethiopia’s Prime Minister that the decision to normalize the relationship needs to be applauded.

The Minister said that the decision made to end the long tension between the two countries and open a new chapter of peace ‘is truly historic’.

“The prime minister is leading the way in the peace process together with Eritrea…it has the fore support of Germany and Europeans and we are thankful and appreciate very much for his doing with full respect” he said.

The Minister lauded Prime Minister Abiy Ahmed for his initiation and move that changed the domestic situation and the history between the two countries.

“The Prime Minister is a man of peace and he is moving the country forward, we will provide more support.” he said.

He affirmed that Germany is desirous to strengthen and expand its cooperation with Ethiopia especially in the areas of agriculture, creating jobs in rural areas and vocational and technical training.

Chief the Staff of the Prime Minister, Fistum Arega told ENA that the Premier briefed the Minister and his delegation about the current reforms that aimed to enhance the country’s development and democratic system building.

He also briefed them about the process of finalizing the rapprochement process with Eritrea.

The Prime Minister, who extended appreciation for the government of Germany for its support in higher education, science and technology, called on the country to further scale up the cooperation.

Noting that the presence of German-based companies in Ethiopia is limited, Fitsum said it’s a priority in the Ethiopian side to attract more German companies.

“Germany is working to be a market destination for Ethiopia and importing Ethiopian coffee and other agricultural products while Ethiopia exports machineries and various technology products”, he said.

This afternoon, the two countries through their ministers of economic cooperation and development have inked a 100 million Euros agreement to financially and technically support training and job creation programs.