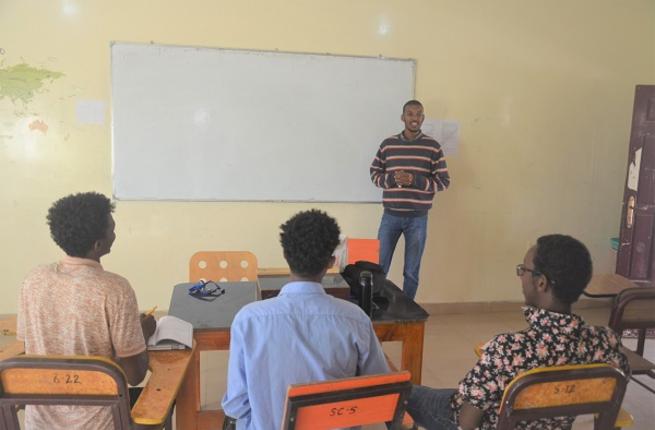 With the power to decide a student’s future, college admissions exams are one of the most stressful hurdles on the path to higher education. For the SAT, the exam used by U.S. colleges and universities to make admissions decisions, students are advised to get lots of sleep, eat a healthy breakfast, and show up on time.

Typically students don’t have to make a 500 kilometer drive across international borders to reach the nearest testing center. That’s what Somaliland resident Najib Abdihamid Ahmed had to go through, driving all the way to Addis Ababa, Ethiopia, to take the SAT exam so he could apply to Georgetown University in Qatar. But Najib Ahmed isn’t a typical student.

Now a graduate of Georgetown’s Qatar campus, he was a member of the first graduating class of the headline-making Abaarso School of Science and Technology in Somaliland, an American-style boarding school for grades 7-12, personally founded and funded by successful American hedge fund trader Jonathan Starr in 2008.

Somaliland, often described as a poor but relatively stable oasis in an unstable region, is an unrecognized nation that broke away from Somalia 25 years ago. Starr’s founding mission was “to build a transformative school in a place the world had written off as hopeless,” then to send the best and brightest to top colleges and universities around the world. For his development plan to work, they would then have to bring their newly acquired skills and valuable diplomas back to Somaliland to become the doctors, lawyers, teachers, and future leaders the struggling republic desperately needs. But there was no guarantee his gamble would work.

“One of the biggest challenges for students in Somaliland is the idea of returning to their country if they have the opportunity to work and live abroad. Returning is a sacrifice not many are willing to make,” explains Najib over the phone from Abaarso, where he now works as the Dean of Boys, and on the faculty of English, history, and social studies. “Being amongst the first cohort of students, my success abroad was as crucial as my return to Somaliland. If I hadn’t returned, over a hundred of Somaliland’s top young minds would not have considered returning upon graduation. Joe convinced me going home was the right decision.”

Joe is Joseph Hernandez, the director of admissions at GU-Q. “When Najib mentioned that he had been offered the opportunity to contribute to the administration of his former school, I encouraged him to take it.” Joe recalls that he was impressed with the quiet applicant from this new innovative school in Somaliland the first time he met him. “When we find a student that has done well in high school and has overcome the odds to do it, that gets our attention.” Recognizing his potential, Hernandez worked to secure the financial aid that made Najib’s enrollment possible.

“I was a typical 17 year old when I came to Doha. I chose Georgetown because I did research and knew it was a top school, but I didn’t know what I wanted to do as a career. I only knew that I liked political science, writing and reading books.” But his transition wasn’t easy. The summer heat was unexpected, his luggage was lost, and on his first trip, Djibouti officials deported him back to Somaliland’s capital Hargeisa because his unofficial Somali passport wasn’t recognized. With campus support, he overcame homesickness and culture shock to embrace student life. An honors student, he was a member of the Debate Team and Science Club, and played for the men’s basketball team, graduating with a degree in International Politics in 2017.

His education has served him well as a teacher back in Abaarso. More significantly, he currently helps design parts of the curriculum—a requirement for the continued accreditation by the New England Association of Schools and Colleges (NEASC), the same institution that accredits top schools and universities in the U.S. and around the world.

Najib speaks humbly of his achievements, but there is unmistakable pride when he shares plans for the future – increasing Somali teaching and administrative staff, a teacher-training university for Abaarso alumni to support the struggling education system in Hargeisa, boosting recruitment drives in more remote regions and neighboring countries, and blue-sky plans to add a primary school someday.

Georgetown University in Qatar has since accepted three more students from Abaarso. Starr, who leaves the day-to-day running of the school to a new headmaster and now spends much of his time in New York raising school funding, knows that the story of his students matters to many people. “Since Najib was part of our first class, he was the pioneer braving a new country and a serious university without any proof that an Abaarso student could make it in such a place,” he says. “That’s why I am so proud of Najib. Our alumni can see that he is back in Somaliland even after graduating from one of the top universities in the world. They can see him thriving, and that is an inspiration.”