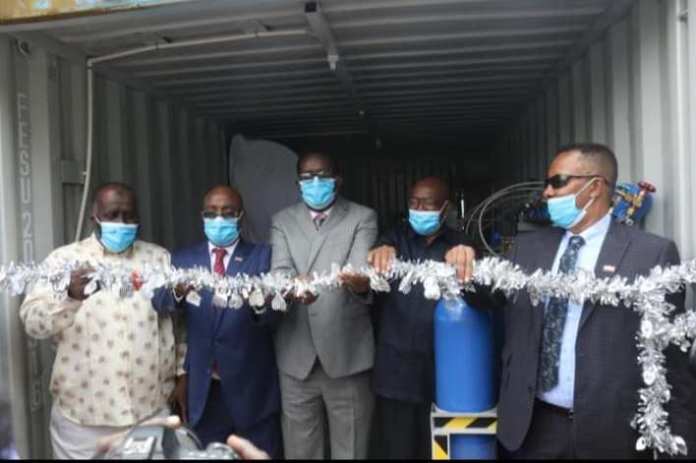 Vital Medical Equipment donated by Genel Energy has been handed over to Burao General Hospital in Somaliland where the company has been working over the last ten years. The much-needed equipment consisting of a regional capacity hospital oxygen plant, ventilation equipment, oxygen cylinders, and other related paraphernalia has been officially
handed over to the hospital authorities by the Somaliland Minister of Mines and Energy H.E. Jama Mohamoud Egal accompanied by the Somaliland Minister of Health Development H. E. Omar Abdillahi Bedde in a ceremony attended by the local authorities and members of the public.

The Ministers and the hospital authorities appreciated the life-saving importance of the oxygen and ventilation systems for which Burao city and the whole Eastern regions of the country are expressing their thanks and gratitude to Genel Energy Somaliland. Before this Genel donated solution, the hospitals in the region were using small
inefficient bedside units.

Mr. Abdi Din Hassan, the Genel Energy Somaliland officer completing the handover of the equipment at the reception ceremony conveyed Eid Mubarak and greetings to the people and government of Somaliland from Genel Energy Chief Executive and management. He accepted thanks from the Ministers and the local health authorities stating that Genel
Energy has always stood by the side of the people of Somaliland. He added that the much-needed oxygen plant, cylinders, and equipment handed over today is not the first donation Genel Energy had made to the region.

Mr. Abdi Din Hassan recalled that Genel had over a long period donated assistance and support towards a diverse number of worthy causes in Somaliland, including drought relief, towards education as in Hayira School where Genel spent over US$ 50.000 to build the school, support for starting and setting up Tusmo Orphanage as well as transport and water tank trucks for Saraar and Togdheer regions donations to facilitate a region-wide emergency aid water delivery, 45 Wonderbags for 3750 families. In the case of the
important Oxygen Plant, through the suggestion and guidance of the Mines and Energy Minister, Genel Energy Somaliland, after appropriate research for quality and speed, contracted Anppcan, a reputable local company to procure the equipment who successfully executed the project.

On his part, Health Minister expressed his thanks to Genel Energy for their continued support including the earlier gift of PPE distributed to the Genel area districts.

The handing over ceremony was also attended by high-level representatives of the local community leadership, diverse government departments, and members of the local community who all expressed their gratitude for Genel’s support over many years. They thanked the company and asked Mr. Abdi Abdillahi to convey their support and best wishes.

They mentioned the robust and helpful way Genel Energy exercises its Community Social Responsibility and the positive way Engineer Ibrahim Mohamed Hassan and the local team is engaged with the local population.

The equipment was already operational as of Friday last week.