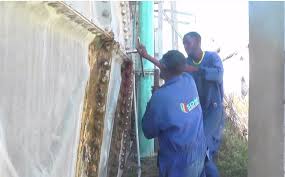 Borama can be arguably the best city in the country where water supply services has been the most aptly distributed and managed, thanks to the members of board who are in charge of the tasks.

With piped tap water supplied to and received by almost every household, thanks to the local water management acumen of Shaba Water Company, the rapidly rising population has only but increased the demand.

While investigating the arising challenges posed to the company, Dawan Media Group senior journalist Dahir Mohamed Hadi visited the offices of the company and met its CEO Eng Abdirahman Abdisalan Sheikh Ali Jowhar and other community board members of the institution.

Mr. Dahir noted that the challenges posed by the rising population were real and quite monumental.

The engineer pointed out that formerly much of the water was sourced from the eastern parts of Borama, but they have explored and are drilling others in the western areas of the city, their latest endeavors being in the Satawa vicinity.

Reporter Dahir observed from his talks with the engineer heading Shaba water company that the extensive efforts of sourcing the all-important livelihood-sustaining commodity was quite costly and that it demanded aid or help, as such chores does, anywhere else in developing countries.

Usually, apart from the local government and water ministries, international NGOs initially eked in to supplement and sustain such efforts by Shaba Water Company, which is at the epitome of its expertise as concerns water management.

In essence, the area populaces praise the work done by the Shaba Water company, its new management and the community board members as a whole.

Meanwhile, the manager and the members of the board are kindly requesting the government, international NGOs, and well-wishers to support it in seeing to it that the two new boreholes found in Satawa area are sourced by further funding its endeavours.