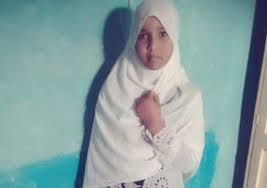 NAIROBI ( Reuters ) – The gang rape and murder of a 12-year-old girl in Somalia has sparked outrage, demonstrations and calls for authorities to use a landmark 2016 law to secure justice, in a country where violence against women is rarely punished.

Aisha Ilyes Aden was abducted at a market in northern Puntland’s Galkayo town on Sunday. Her body was found the next morning near her home. A post-mortem found she had been gang raped, her genitals mutilated and strangled to death.

Four men have been arrested. The brutal nature of the killing has triggered anger in the conservative east African nation, where rape is stigmatized and victims are traditionally forced to marry their assailants.

“Sexual violence is sadly not a shocking occurrence in Puntland. For years it has been relatively common place,” said Hawa Aden Mohamed, founder of the Galkayo Education Center for Peace and Development, which promotes women’s rights.

“Aisha’s is a truly tragic case, which has resonated very deeply here in Puntland. I hope it will shake things up. The seemingly never-ending violence against women and girls, where men can evade any responsibility for what they do, has to end.”

Demonstrations have been held in Puntland and Somalis have taken to social media using the hashtag #JusticeForAisha calling for a proper investigation into the murder.

Under the law, five men who gang raped a teenage girl – with a video of the attack posted on social media – were sentenced in 2017 to lashes and up to 10 years in prison, according to the United Nations (U.N.), a key backer of the legislation.

Campaigners say police are either unaware of violence of women or do not see it as a serious crime, which deters women from reporting abuse.

“Gender-based violence is a grave violation of individual women’s and girls’ rights – the rape and subsequent murder of Aisha is a terrible example of that,” said a statement from the U.N. Population Fund (UNFPA) in Somalia.

“Impunity … reinforces the discrimination against women and girls, perpetuating a vicious cycle that is detrimental to their development and progress.”