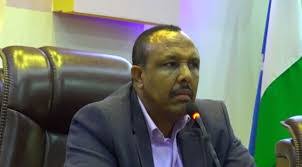 Former speaker of Puntland state parliament accused president Said Deni of being responsible of the conflict with his deputy president. Mr. Abdikarin Mohamed Ahmed “Dhoobodareed” said that president Deni strongly opposes that officials that are close with him to have consultations regarding his decisions, including the VP and the parliament speaker. Dhoobo said that the conflict broke out after Deni refused to be in consultations with Ahmed Karash, the VP. He said that he was among individuals tasked to resolve a conflict to emerge to the public’s know. Former ousted Puntland parliament state speaker said that Puntland cannot continue to exist if all powers are in the hands of president Said Deni and his group. He called on that Puntland constitution must be upheld. The ex-state Puntland parliament speaker was removed office in a move where blood was shed in November last year after he fallout with Deni. He was removed from the post within days.