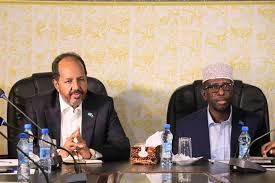 Mogadishu–More than six Somali opposition parties — including two major parties led by former presidents of the country — have joined hands to form a new political alliance following a meeting in the capital Mogadishu on Tuesday.

Abdilatif Muse Nuur, a lawmaker and the new coalition spokesman, told reporters the alliance has been formed after the main opposition parties met in Mogadishu.

“We will work together to resolving the current political and security issues that this country is facing,” Nuur said.