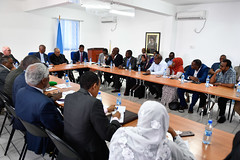 MOGADISHU – 22 July 2019: Former President of South Africa Thabo Mbeki on Sunday met with representatives of Somali Civil Society Organisations (CSOs) and told them that he was in Somalia as part of the process to seek the views of the people of the Horn of Africa regarding an integrated approach towards peace, development and economic cooperation.

Former President Mbeki is leading an African Union High-Level Implementation Panel (AUHLP) mandated by the AU to facilitate the security, political and economic integration of the countries of the Horn of Africa.

In his meeting with the CSOs representatives, former President Mbeki explained that the people of the region had to express their views on integration and that the panel would not impose its views on the people.

“It is important for us to be able to hear your views about this because that has to inform our work. We are just a committee of three. We cannot impose this issue on the people of the Horn of Africa. It has to come from the people of the region and we are here to facilitate that kind of process,” Mr. Mbeki stated.

Though most of the CSO representatives expressed support for regional integration, they raised concern over a number of critical issues, such as peace and security, political collaboration and economic reforms, which they noted, first needed to be addressed at a national level prior to the integration.

“Our region is very important to the world. We are in a strategic geographical location that everyone is looking at and seeing where they can fit, but if we do not join forces and integrate accordingly, we will miss a lot of opportunities,” Ms. Asha Abdulle Siyad, the Executive Director of Somali Women’s Leadership Initiative said.

Former President Mbeki informed the meeting that his panel had held talks with the Special Representative of the Chairperson of the African Union Commission (SRCC) for Somalia, Ambassador Francisco Madeira and the AMISOM senior leadership team on the Somalia security situation.

Prior to the meeting with the CSOs, former President Mbeki together with Ambassador Ramtane Lamamra, the AU Special Envoy for Silencing the Guns, laid wreaths in honour of the men and women of the AU Mission in Somalia (AMISOM) and the Somali national security forces who lost their lives in the pursuit of peace and stability in Somalia. They also paid tribute to the peacekeepers for the sterling role they are playing in helping restore peace and stability to Somalia.

“It is a very significant occasion that we were able to lay wreaths here because the role that AMISOM has played in helping the Somali people to change their situation for the better and therefore helping the rest of the continent to achieve that has been very important.

“It remains a challenging task but what is inspiring is the commitment of the whole of AMISOM to the pursuit of this goal and therefore, I think it’s very important that the SRCC gave us the opportunity to lay these wreaths so that we can pay tribute to these important Africans who are doing a sterling job,” the former President said in his remarks moments after laying the wreaths.

The AU panel arrived in Mogadishu on Saturday on a three-day consultative mission, to pursue the objectives of regional integration in the Horn of Africa, and held talks with the Somali President, Mohamed Abdullahi Mohamed Farmajo upon arrival.