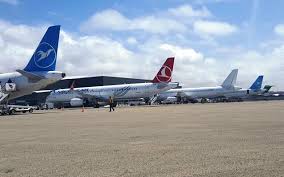 Chaos temporarily disrupted the airport’s operations after security officers inside the facility received an unfounded intelligence information suggesting that Al-Shabaab gunmen had burst their way into the nearby Afisyoni camp and were on their way to Adan Adde’s terminals.

People immediately began streaming out of the terminals of the fear-gripped airport, just days after insurgents attacked a nearby base housing foreign diplomatic missions and African Union peacekeepers.

Somalia’s security agencies have not immediately commented on the incident.

Local media reported this week that the National Security and Intelligence Agency (NISA) had warned of an imminent terrorist attack on a bus that transports airport employees.

In comments on the incident, opposition MP Mahad Salad said it was part of attempts by the incumbent President Mohamed Abdullahi Farmajo and his allies to frighten foreign diplomats inside Halane base and expel them from the country. Somaliguardian has been unable to verify the MP’s assertion.