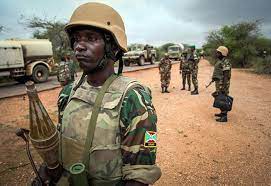 Four soldiers from Burindi were killed and another wounded after a blast targeted their military convoy in Somalia’s middle Shabelle region, Al Shabab militant media claimed.

The Burundian peacekeepers have not commented on the claim by Al shabab, which occurred after another bomb attack killed a traditional leader and injured five others, including two Hirshabelle parliament members in the town of Jawhar, about 90 km north of Mogadishu. The attack occurred on the road connecting Jawhar to Mahaday. Conflicting reports about the explosion indicated that there was a suicide car bomb targeting the African Union military heading to Jawhar. A separate attack targeted a base manned by Ugandan peacekeepers in Arba’ow on the vicinity of Mogadishu. Militants have claimed responsibility for the attack, saying they have killed at least five Ugandan soldiers. The African Union did not so far commented if there were casualties.