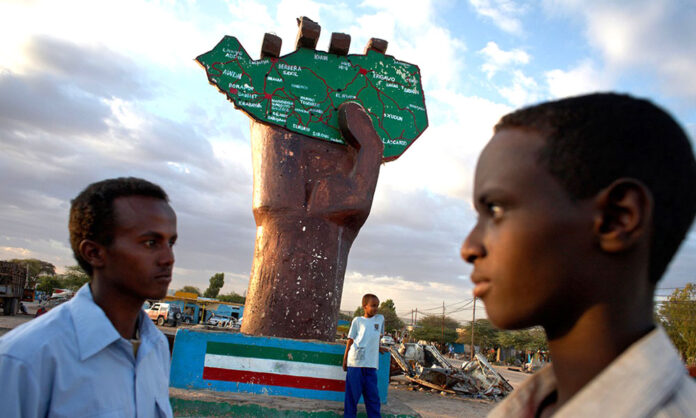 At the same time, Somaliland’s success in maintaining peace in a region bedeviled by conflicts is a result of the bottom up approach at state building that derives its legitimacy from local clan elders and the local ownership of civil institutions, including stable economic, political, security and social welfare institutions according to international observers.

Experts in international development Kenneth C Upsall and Sarah Phillips separately agree that peace “works because Somalilanders want it to work,” and that, because of the lack of policing capacity, the country “runs on trust.

Kenneth C Upsall, an author in international relations says Somaliland’s attempts at state building have proven to be comparatively successful and should be viewed as a model for successful state creation in third world or tribal type states.

“Although it lacks international recognition, Somaliland is the lone example of a functioning sovereign state in the Horn. The unrecognized state of Somaliland has now functioned since 1991 as a self-sustaining state and has repeatedly received positive attention from the international media for the way it has embarked upon post-conflict reconstruction.”

And Phillips, an expert on international development in her book “When There Was No Aid: War and peace in Somaliland” says Somaliland provides a curious example of development without intervention.

“Anyone who has visited Hargeysa, the capital of Somaliland, knows that the country’s peace-building process elicits proud assertions of Somalilanders’ ability to end a brutal war with almost no external assistance,” observes Phillips.

She says: “Somaliland received almost no official development assistance (ODA) during its early years. Indeed, not only did Somaliland receive no ODA, it received (almost) no international charitable contributions, no support for state-building or peace-building, no peacekeeping missions, no political support for belligerents in its civil war, no military assistance, no access to the licit international weapons trade, no significant involvement in extractive industries, minimal foreign investment, and no access to international loans. And it was unencumbered with international debt repayments. Other than the remittances Somalilanders were sending home from abroad, the country was remarkably free from external involvement of any kind.”

“For all the doubts raised about the effectiveness of international assistance in advancing peace and development, there are precious few examples of developing countries that are even relatively untouched by it.”

As a result, it is ordinarily very difficult to consider counterfactuals, which question whether aid is actually helpful. Somaliland’s example offers partial clues. Its peace was “painstakingly negotiated under the trees at dozens of clan-based conferences”, while Somalia’s was “negotiated in five-star hotels funded by the United Nations”. Only one endured.

In his write up, Upsall  says that Somaliland’s example provides the most compelling alternative to the failed attempts to implement governance in Somalia from above.

“In post conflict Somalia the top down approach to state building has been ineffective and a lack of government structure at the time of independence created an environment in which clan based fracturing of the government was inevitable.”

Somaliland has used traditional practices to create a sustainable modern government by blending “modernity and tradition” into a functioning state.

Somaliland’s claim to sovereignty stems from the fact that in 1960 it was itself an independent state, which freely joined into unification with Italian administered areas of southern Somalia to create the Republic of Somalia. Somaliland asserts that when the government collapsed in 1991 it returned to its independent status after the Conference at Burao, when Clan elders met for a week in the center of Isaaq Somaliland and agreed to six resolutions which would end the civil war in northern Somalia and establish a separate administration from Mogadishu

Inter-clan conflict after the Burao conference was successfully resolved by delegations of clan elders from the conflicting groups, proving that conflict resolution on a local level was achievable.

The Somaliland Guurti, or House of Elders, which represents the major clans and ensures balance within the clan system is cited in the Somaliland Constitution as being responsible for “review (of) the legislation passed by the House of Representatives before it is forwarded to the President; and shall have special responsibility for passing laws relating to religion, traditions (culture) and security. This places significant power back into the hands of clan elders – members of the Guurti must be 45 years of age or more – who have the experience of the civil war and peacemaking behind them.