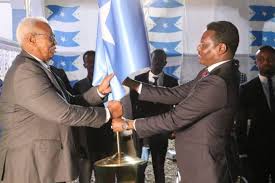 The President of Galmudug State of Somalia Ahmed Abdi Kariye Qorqor has officially taken the helm of the regional state from his predecessor Ahmed Du’ale Gelle Haaf.

The official handing over ceremony was held in the State’s capital Dhusamareb on Sunday.

It was attended by the members of the two chambers of Somalia’s Federal parliament, state representatives, traditional and community leaders of the central state.

The ex-president Ahmed Du’ale Gelle Haaf announced that he is handing over the leadership of the state to his successor.

President Haaf earlier boycotted the election process that brought Ahmed Qorqor to the presidency of the state.

Howerver, Ahmed Haaf has now pledged that he will be part of the completion of the state building in Galmudug.

The new Galmudug state president Ahmed Abdi Qorqor thanked the former leader for passing the mantle and gave him a fresh mandate to lead the reconciliation process of the region.

He considered this occasion a new dawn for uniting Galmudug state.

President Qorqor further announced that his plan is to start building government institutions that lead the state to development and the realization of its residents their aspirations.