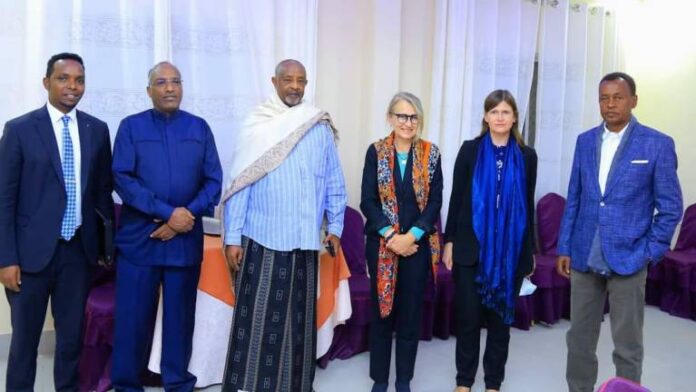 EU ambassador to Somalia, Ms. Tiina Intelmann, is on official working visit to the republic of Somaliland. Ambassador Tiina met yesterday with top figures of Somaliland’s ruling Kulmiye party officials. During the meeting, the sides held discussions concerning the peace and stability in the Horn of Africa and the crucial role that Somaliland could play. The newly appointed EU envoy to Somalia is visiting Somaliland in an effort to continue to advance EU-Somaliland relations. Governing party officials and EU top diplomat to Somalia also discussed preparations so far done in regard to the upcoming presidential elections. The tow sides have also talked about the aid that the EU provides to Somaliland in support of boosting security and development projects in Somaliland. The EU is currently funding projects aimed at boosting Somaliland’s police force and coast guards. First chairman of Somaliland’s ruling party and the interior minister, Mohamed Kahin Ahmed, second deputy chair of Kulmiye ruling party, Ahmed Abdi Dhere, and ex- government minister who is a member of executive council of Kulmiye party, Abdiasis Samale were in attendance.