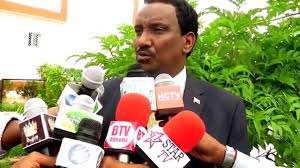 Somaliland minister of Agriculture has changed his mind on the usage of pesticide sprays in order to combat against the infestation of locust swarms in the country.

The Minister, Ahmed Mumin Seed has today confirmed that planes will be dispatched to areas that are hit by locust and will be used as a vehicle to spray the locust which is causing massive crop damage in southern border areas with Ethiopia.

Mr. Ahmed has said that Ethiopia’s Somali region will provide planes that will spray the locust in Somaliland.

The Ethiopian planes will use local airports in the country.

The minister has made the above comments during a briefing to the house of national assembly subcommittee for environment.

The minister has recanted earlier statement in October which he declined the usage of pesticide sprays.

There was no reason given by the minister of changing the earlier decision.

It is believed that the ministry is concerned with the environmental side effects.

The minister has told the parliamentary committee that the gov’t has informed World Food Program (WFP) to stop the importation of food aid to Somaliland.

The move is meant to protect the local farming production which have cried foul of the food aid brought to the country during local crop production.