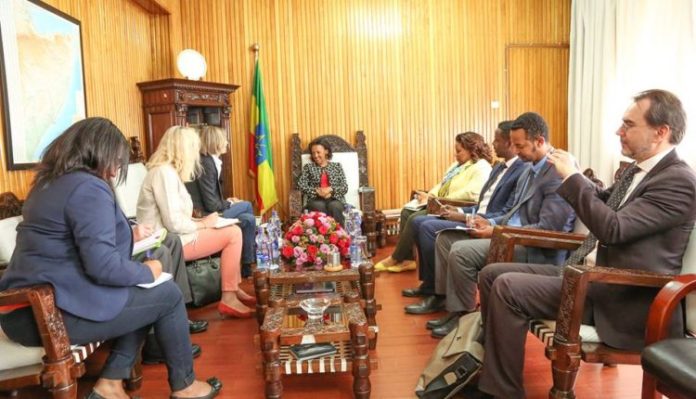 The two sides agreed to further strengthen the bilateral cooperation between the two countries.

She also said, “Ethiopia is appreciative of France’s support to restore and renovate Ethiopia’s historical relics, particularly the Rock-Hewn Churches of Lalibela and the National Palace,” adding, “this further consolidates the Ethio-France long-standing bilateral ties”.

Mrs. Marielle De Sarnez took of the reforms Ethiopia is undertaking towards the deepening of democracy and advancing rule of law, as well as ensuring media freedom.

She also commended the Ethio- Eritrea peace accord, which she says, has played a positive role for peace and stability in the Horn of Africa region.

Mrs. Marielle De Sarnez further described the growing development assistance, trade and investment ties between Ethiopia and France as exemplary in all spheres of cooperation.

President of France, Emmanuel Macron is set to visit Ethiopia next month, according to the Ministry of Foreign Affairs.