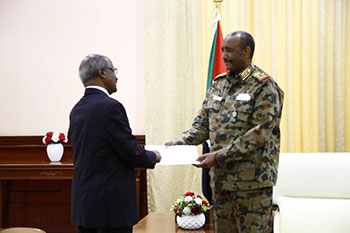 At a meeting conducted at a State House in Khartoum, the Eritrean delegation delivered a message of President Isaias Afwerki congratulating the people of Sudan on a historic achievement which will contribute to advancing bilateral ties and regional cooperation.

President Abdul Fattah al-Burhan stated that consolidating ties with Eritrea is a cornerstone of Sudanese foreign policy. He added that Sudan will closely coordinate with Eritrea to strengthen regional cooperation.

Eritrea’s delegation also met Prime Minister of Sudan’s Transitional Government Dr. Abdalla Hamdok. The two sides stressed their readiness to benefit from vast opportunities created by positive changes in Sudan to develop comprehensive bilateral cooperation. The PM said that ending conflict and making peace was a key priority for Sudan and called for support from Eritrea and neighboring countries in Sudan’s new efforts.

It is to be recalled that Eritrea’s delegation composed of Foreign Minister Osman Saleh and Presidential Adviser Yemane Gebreab met President of the Republic of South Sudan Salva Kiir Myardit in Juba yesterday, 21 August and delivered a message from President Isaias Afwerki focusing on measures for strengthening bilateral ties and mechanisms for regional integration.