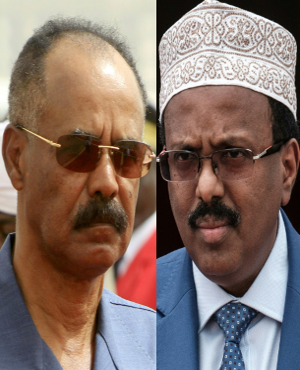 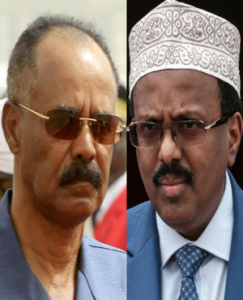 Eritrea and Somalia have agreed to restore diplomatic relations, both countries announced on Monday in another thaw in the restive Horn of Africa region, while Somalia’s leader called for sanctions on Eritrea to be removed.

Eritrea’s information minister shared the joint statement on Twitter as Somalia’s president ended a historic three-day visit to one of the world’s most closed-off nations. The countries have not had diplomatic ties for nearly 15 years.

Somalia President Mohamed Abdullahi Mohamed called for the lifting of the UN sanctions on Eritrea over its alleged support of the Somalia-based al-Shabaab extremist group, which Eritrea has long denied.

“We urge all economic sanctions and embargo imposed on the people of Eritrea must be lifted so that the economic integration of the Horn of Africa region can be realised,” Mohamed told a banquet hosted by Eritrea’s president on Sunday night

The visit by Somalia’s leader, at the invitation of longtime President Isaias Afwerki, follows a stunning diplomatic thaw between Eritrea and neighbouring Ethiopia after more than two decades. Ethiopia under reformist new Prime Minister Abiy Ahmed has asked that the sanctions on Eritrea be dropped.

The UN chief has indicated the sanctions could be obsolete.

The UN Security Council, which would have to lift sanctions, said after a meeting on Monday on measures against Somalia and Eritrea that it welcomed the positive developments in the Horn of Africa involving the two countries and Ethiopia.

Eritrea appealed for the lifting of sanctions at the council meeting, citing support from Ethiopia and Somalia, but Djibouti said the measures must remain in place until a border dispute between the two countries is resolved.

The Security Council imposed sanctions on Eritrea in 2009 over its refusal to withdraw its troops from the disputed area and its rejection of all efforts aimed at mediating between the two countries.

Sweden’s UN ambassador, Olof Skoog, the current council president, said the future of sanctions is being discussed by council members. “There is a promising diplomatic initiative” involving Eritrea and Djibouti, he said, and “there is a willingness to support the region in these efforts.”

The changing relations in the Horn of Africa region are of both political and economic interest to the wealthy Gulf states just across the Gulf of Aden and the Red Sea. Already they have been jostling for influence in the African nations along one of the world’s busiest shipping lanes, including both Somalia and Eritrea. Landlocked Ethiopia also eyes both countries’ ports as outlets for its fast-growing economy.

Somalia remains fragile under the threat of al-Shabaab, which holds some rural areas and often carries out high-profile suicide bombings in the capital, Mogadishu. A truck bombing in October killed more than 500 people in the deadliest attack in the country’s history.