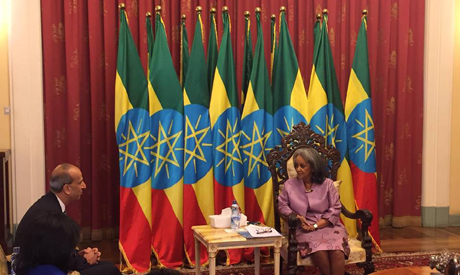 The ceremony was held at the presidential palace in Addis Ababa.

El-Sisi’s message also highlighted the importance of enhancing the bonds of friendship between the Egyptian and Ethiopian peoples and building on the important visit by the Ethiopian Prime Minister Abiy Ahmed to Cairo last June.

The new ambassador said that he is looking forward to advancing the various aspects of the partnership between the two countries, including on the political, economic, commercial and cultural levels.

The ambassador stressed the importance of joint work between the two sides to maximise the opportunities for regional integration.

He then highlighted Egypt’s keenness to coordinate closely with the Ethiopian government on various African issues and the development of peace and security in the continent, especially during Egypt’s presidency of the African Union starting 10 February 2019.

Abdel-Khalek highlighted that cooperation between the two countries is vital, especially for the upcoming African summit, which will be held in the Ethiopian capital Addis Ababa on 10 and 11 February 2019.