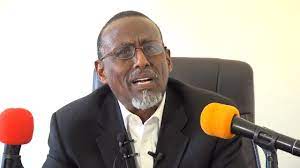 Veteran politician Dr. Mohamed Abdi Gabose has unveiled a new political organization in Hargeisa. The new political outfit will be known as Barwaaqo Political Organization. During the ceremony to unveil it were the who-is-who in Somaliland political landscape attended the widely publicized event.

The veteran politician told the opposition parties that no one can wrestle the mantle of leadership in a Somaliland through intimidation, anarchy, and violence. He stated that the only way to win the presidency in Somaliland is through the ballot box.

The politician was supported by heavyweight figures in Somaliland political arena. Hundreds of jubilant supporters filled the hall where the party was launched.

Dr. Gabose said that the political impasse between the government and the opposition could only be solved through the legality of the country’s constitution and its adherence.

He added that the creation of multi-political parties in the country had the intention to rid the country off tribal politics.

He went on to reveal that some politicians in the country have used their parties to sow discord amongst different clans. He urged them to come up with progressive manifestos to improve the country’s economic development.