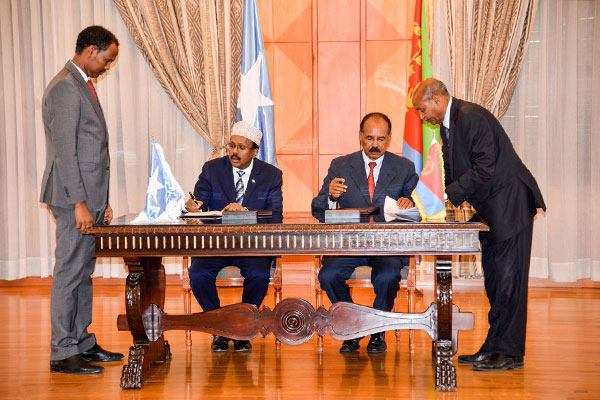 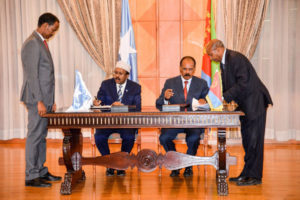 Djibouti is unhappy with Somalia’s calls for the lifting of the United Nations sanctions on Eritrea.

The Djiboutian embassy in Mogadishu said Wednesday that the country was “deeply shocked” by President Mohamed Abdullahi Farmajo’s calls for the removal of the sanctions.

The Somali leader had paid Asmara a historic three-day visit where the two Horn of Africa nations agreed to restore diplomatic relations after nearly 15 years.

Djibouti said the economic restrictions imposed on Eritrea in 2009 were due to Asmara’s refusal to withdraw troops from their disputed border and for its alleged support of Somalia-based Al Shabaab jihadist group.

“It is unacceptable to see the brotherly Somalia support Eritrea which is occupying part of our territory and still denying having Djiboutian prisoners,” a statement on Wednesday from the Djiboutian embassy read.

The country said it would not “tolerate ruthless talks while our young men and women are yet here defending Somalia’s peace and stability.”

Djibouti, alongside Uganda, Kenya, Burundi and Ethiopia have contributed soldiers who make up the 20,000-strong peacekeeping African Union Mission in Somalia (Amisom) to support Mogadishu’s fight against Al Shabaab.

In the wake of the thaw of relations between Ethiopia and Eritrea that ended two decades of hostility and restored diplomatic ties, Djibouti asked the UN Security Council for help to mediate its long-standing border dispute with Asmara.

“Eritrean forces continue to occupy Djiboutian territory, prisoners of war remain unaccounted for, threats of force continue to emanate from the Eritrean side and the risk of violent confrontation is once again high,” Djiboutian ambassador to the UN wrote in a letter to the Security Council last month.

Djibouti has taken issue with President Farmajo’s apparent lack of concern in pushing for resolution of its border dispute with Eritrea as he sought to restore ties with Asmara.

“We take serious the historic less support of our Somali brothers who blindly supported Eritrea,” the embassy said.

Clashes erupted between Djibouti and Eritrea in June 2008 after the former accused the latter of occupying its territory — the Dumeira mountain and Dumeira island.

The two Horn of African nations agreed to a Qatar offer to mediate the border conflict two years later which saw Qatari soldiers deployed to the disputed border. However, Qatar withdrew its soldiers last year following the Gulf crisis, raising tensions between the neighbours.

On Wednesday, media reports in Somalia indicated that the Djiboutian ambassador left the country. It was not, however, clear where to or why.