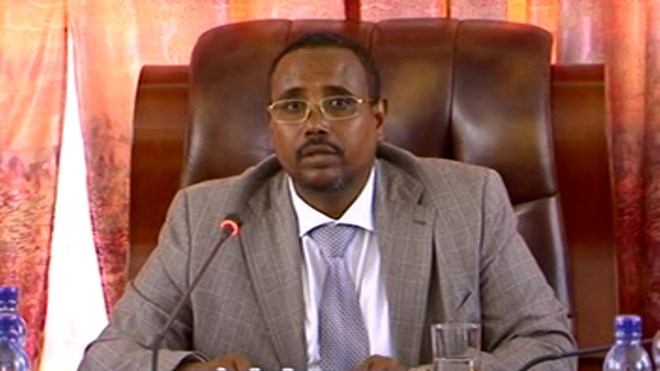 Judges at the federal high court 4th criminal bench have ordered the police to bring either bring the 41 defendants being tried in absentia along with ex-Somali region president Abdi Muhamud Omer a.k.a Abdi Iley. and five others or present irrefutable evidence justifying their non-existent status to stand trial.

The judges’ decision came in response to objections from the defense team of the six defendants who are currently under police custody.

The defense team objected the polices’ request for additional 14 days in order to bring in absent defendants and argued that the polices’ hitherto inability to bring in suspects was causing unnecessary delays in their trial.

The judges have therefore given last order to the police to apprehend and bring the remaining 41 defendants of file status report on their whereabouts during the next hearing.

Ferhan Tahir, former police commission commissioner of the Somali regional state has also raised the issues of the court’s impartiality and to preside over the case.

The judges have dismissed Ferhan’s objection and said the court was impartial and that the trial will proceed.

In a related development, translators to help two of the defendants: Worseme Sheik Abdi and Guled Obel Dawud failed to appear at the court today as was ordered by the judges during the last hearing held on February 15. Both defendants have told the court on February 15 that they have not received copies of the charges, nor have they been briefed about their alleged crimes due to lack of Somali language translators at the court.

The court adjourned the next hearing for March 29 during which the police should report on the status of the 41 defendants being tried in absentia, and bring in court room translators to help Worseme Sheik Abdi and Guled Obel Dawud understand the criminal case they are charged with.

On January 25, the Attorney General’s office revealed that the August violence resulted in the killings of 58 people while 266 were injured. the report by the AG also revealed a gruesome details which were previously unreported, including the discovery of a mass grave where the remains of 42 of the victims was found.

Eight more bodies were discovered inside the premises of St. Michael Church in Jigjiga city. The report also said ten women were raped in just a span of three days but added there could be more unreported cases of rapes. And properties worth about 421 million birr were also vandalized in the violence.