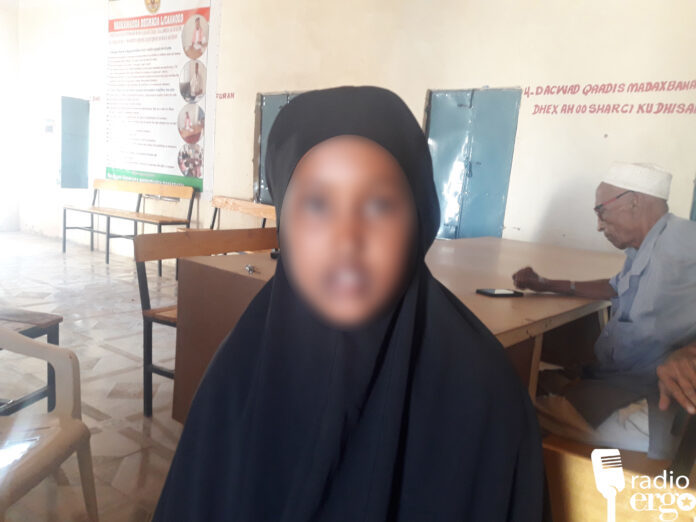 For the first time since Somaliland criminalised forced marriage, a 14-year-old girl has successfully been granted a divorce at a court in Sool region

Hawa Isack Adan was engaged to be married when she was just 11 years old to Aftin Abdi Adan, 38, in 2015 following a family negotiation over dowry. Hawa was a standard six pupil at school in Buhodle town, where she had been living with her mother after her parents separated.

In January, Hawa was moved to Lasanod town and married her fiancé in a ceremony attended by relatives.  It was an event that will beforever seared in her mind.

“For the first seven days, relatives and my father had been watching me so that I could not escape. I was kept indoors with the man. One day in the second week, I got a precious opportunity to escape and did not miss it,” Hawo told Radio Ergo.

Hawa looked for a chance to escape and travelled to Hargeisa town to stay with her maternal grandmother for sanctuary.

But her father reported her missing, and her mother and step-father were arrested and accused of hiding her.

Hawareturned to her new husband’s home in Lasanod in order to secure her mother’s release. It was then that she decided to try another bid for freedom by taking the matter to court.

“I remembered hearing that some people sought help in the courts. I did not get advice to seek a divorce from anyone but the circumstances under which I was in pushed me to find a way out,” Hawa told Radio Ergo.

She filed a divorce case on 24 February at the court, according to magistrate Omar Sheikh Mohamed.

“The young girl came to the court and filed a case on grounds of forced marriage. After investigations, we ascertained that the father of the girl allowed a man to marry his daughter, who was then 11 years old.  The girl now is 14 years old, she had been engaged to the man for these three years,” the magistrate told Radio Ergo’s local reporter.

The court asked the husband to divorce Hawo but he refused. The court then summoned the husband, and Hawo’s father and step-father.  The case went on for nine days and was concluded on 4 March, with an order for the divorce.

During the proceedings, the court heard that Hawo was threatening to commit suicide if she was forced to accept the marriage. Her father, on the other hand, insisted that the marriage must remain in place.

Hassan Mohamed Warsame, the chairman of the court, said this was obviously a case of forced marriage as the girl opposed living with the man, and was also underage at the time of their engagement.

“The father did not consult the girl on this issue of marriage and therefore the court passed the ruling in favour of the girl,” he said.

The court asked Hawa to forfeit the three-year-old heifer valued at $400 that she was to be given by her husband as meher in exchange for the divorce certificate.

Meheris a mandatory payment made by the groom to the bride at the time of marriage.

After the verdict, Hawo told Radio Ergo that she wanted to resume her education.

“I will go back to my town (Buhodle) to restart my school and rebuild my life!” she stated to Radio Ergo.

Whilst the Sexual Offences Act of Somaliland enacted in April 2018 provides for prison sentences of five to 10 years for those who facilitate or are involved in forced marriage, the court decided in the interests of the future harmony of the family not to impose jail terms on Hawo’s father or the man she was to marry.