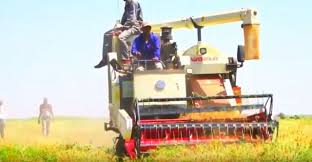 This week, the Bihi administration has given permission for a Communist Chinese company known  as  Africa  Agricultural  Development to grow Castor bean seeds, which contain the toxin ricin, in the fertile land of Wajaale Plains, without the consent of the local people, their elected officials, or studies on environment impact on the land, and the livelihood of the communal farmers.

Wayne Armstrong , a botany instructor at Palomar  Junior College in Sant Marcis, California,  said  that ricin is 6,000 times more poisonous than cyanide and 12,000 times more poisonous than rattlesnake venom. Castor beans “are unquestionably among the most deadly seeds on earth, and it is their irresistible appearance that makes them so dangerous,” Mr.Armstrong wrote in a 1982 article in Environment Southwest magazine.

Despite its poisonous,  these days, millions tons of Castor oil seed are grown worldwide, for making everything for paint and varnish to lubricants for jet engines, and nylon.

The Castor plant (Ricious communis) originated in Ethiopia, Africa, but has been naturalized in warm climates all over the world. Commonly found in the wild along stream banks, river beds, undeterred by weeds or insects.

So Why the Bihi administration is giving Communist Chinese a whopping 2,000 hectares of the fertile Wajaale Plains, to grow such poisonous plant when the castor oil plant is drought resistant and tolerates different soil types making it suitable for growing any region of country  where the climate conditions and soils do not favor much cropping?

Wajaale Plains were a source of food and economic development for Gabiley region communities.  In good old days, it was a source of pasture for the local livestock, especially cows and horses, and wildlife refuge. But in 1962, the first Somali government under guidance and advice from Soviet Union experts, without the consent of the local farmers and studies on environmental impact on the land , or the livelihood of the  farmers, bulldozed the Plains to make for a  room , for a hoax  project, to grow wheat for a Pasta factory. The project went under because of lack of sustainability and thoughtful planning.

During the military dictatorship, the hoax Wajaale Plains project was never materialized to produce food for the country let alone for Gabiley county. Post Siad Barre dictatorship, the local people finally won back their god given land .But under gentleman’s agreement with Egal administration, the local elders and politicians, in a good faith, lent  part of Wajaale Plains to the military as temporary relief program, to grow corn to supplement their income, until SL government got enough budget support to pay its soldiers.

Yet up to now not only is the military still there ,they are also selling the local farmers pasture to feed their livestock for money. A pasture that Wajaale farmers’ fathers, grandfathers, and great grandfathers used  for free, like the oxygen we breathe in the air.

The sycophant Minister of Agriculture should  know better that Wajaale Plains belongs exclusively to the local people, under customary laws—who had been living there and cultivating the land for centuries before the  successive Somali governments  take over their land by force, under the pretext of a hoax Wajaale project. The management of Wajaale Plains should be given back the Gabiley Municipality.

Bihi should be aware that Somaliland is not authoritarian government like Ethiopia and Egypt—-where government can take people’s land by force, without  consent, or without compensation.

Moreover, the military has no business in agriculture, or economy. We are not a communist country. Hard working people do the farming to feed the population.  We can grow our own food, if we have a government with a vision and  sound agricultural policy. But with the current agriculture Minister in charge, who does not know anything about agriculture, we do not have that yet.

We should not let Chinese communist china taking our land under the guise of investing, or development. China is not our friend. In fact, they’re bullying us for establishing diplomatic relation with Taiwan. They’re arming Somaliland haters in the south.

There are dangers associated with a Chinese investment scam  on farmers and their land, and our own security. These types of Chinese companies could be a Trojan horse for People’s Liberation Army or Chinse intelligence Services, to undermine the newly formed relationship between Somaliland and Taiwan. They prey on countries where governance and the rule of law are weak, and corruption is rife. They bribe corrupt, unscrupulous government Ministers, who are willing to sell their land with little money regardless the outcome of their actions.

Instead, we should help and strengthen our communal farmers and make them cooperative farming and more productive. The government’s role should  be to open agricultural development bank, to help farmers  buy subsidize crop protection, farm machinery, fertilizers, irrigation(Drip irrigation), and  more importantly develop ground water, and marketing of their products to deliver it to the consumers. Without developing water from underground aquifers, farming in Wajaale Plains would depend on rain, which is sporadic nowadays.

Right now, we are not doing all of those  things. We are one disaster away from another drought. We import most of our staple foods, vegetables and fruits. And now, giving Chinese to Wajaale Plains to grow the deadly Castor beans for their own industry is a mockery.

This blatant disregard the input of the local people and communal farmers would only exacerbate already the tense relation between Gabiley communities and President Bihi, who vehemently oppose Gabiley to become a region with access to Gulf of Aden.

Finally, many Gabiley constituents, including the communal farmers have serious concerns about the purported Chinese agricultural experiment in Wajaale Plains. They oppose Communist China’s farming the deadly Castor beans in Wajaale Plains. Since we’re a free nation,  Bihi should listen and follow people’s wishes. If he does not want to become a one term president, he should stop this madness—-Communist Chinese risky agricultural experiment in Gabiley region.