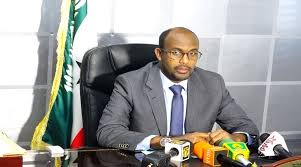 HARGEISA–Djibouti has recently announced the deployment of Cable Fiber Optic and will expand it to neighboring countries including Somaliland.

The Somaliland government has rejected the deployment of the cable in its territorial waters. This was revealed by the minister of communication and technology, Abdiweli Abdilahi Jibril. First of all, he sent a congratulation to Djibouti government on the progress that it has achieved in bring new cable fiber optics to the region.

The minister has reiterated that the cable will be deployed to Djibouti, Kenya and Somalia but Somaliland is part of it. The minister has declared that Somaliland government has not granted any license which authorizes the landing of DARE1 Cable Fiber Optic to its territorial waters. He has strongly repudiated the nature of the news and has refused that the cable won’t land in its coasts. The minister has said that the company has long term plans but what he could disclose is that the firm which is responsible for the deployment has not received the green-light and the go ahead to deploy it in Somaliland coasts.

The minister has argued that there is a huge difference to be mistaken between Somalia and Somaliland. He insisted on that his ministry is the only authorized institution that is capable of granting such license of it exits. He emphasized that there was no license that the ministry of communication has issued as far as the regional fiber optic is concerned.

He stated that DARE1 Fiber Optic company has neither the cooperation nor contacts with Somaliland. He spoke of previous agreements that the ministry has entered into with Somcable which is valid for 25 years and the regulation was passed by the parliament. He narrated that Somcable is the only firm to have the authority to deploy new cables to Somaliland in its land and sea. The minister has repudiated rumors saying that Djibouti has received the permission to deploy the cable in the port city of Berbera. He responded by saying that Somaliland is responsible for safeguarding its borders be it sea, land and the sky. He reiterated that the cable won’t land in SL without the government consent.