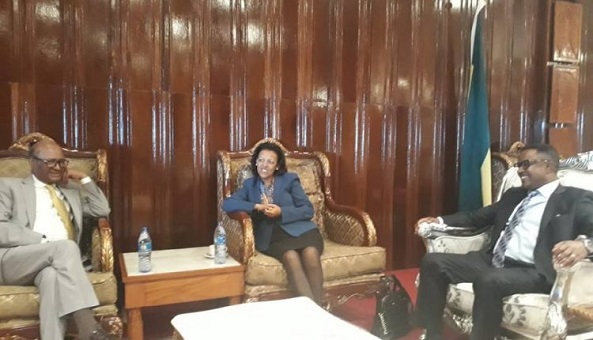 Colonel Goshu Wolde, 76, returned to Ethiopia after 32 years in exile. He has been living in the United States since he sent his resignation letter from New York in 1986 to Colonel Menguistu Hailemariam, the then president of the country.

Colenel Goshu has served as a minister of education and minister of Foreign Affairs, among others, during Colonel Mengistu Hailemariam’s government which was toppled by Tigray People’s Liberation Front (TPLF) in 1991.

He was greeted by Hirut Zemene, deputy minister in the Ministry of Foreign Affairs, up on arrival at Bole International Airport this morning, according to a report by state affilated media – Fana Broadcasting Corporation.

In a statement he gave at Bole International airport VIP lounge, he said that he returned to his country to support the ongoing change and visit his relatives and friends. He was, however, explicit enough that he is not vying for any political office or power.

He recently broke his silence when he appeared in a video message to hail the reforms that Prime Minister Abiy Ahmed is undertaking in the country and called for all Ethiopians to support the reform measures.

It is to be remembered that Goshu Wolde led Medhin party, rather a form of resistance movement, soon after the fall of Derg government, but the movement did not live long enough to challenge TPLF led government meaningfully.