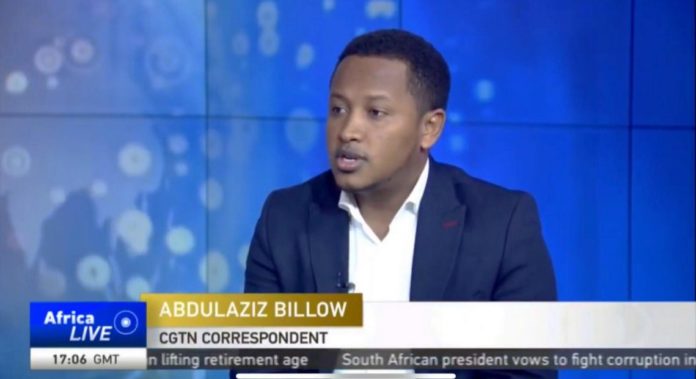 Somali Journalists Syndicate (SJS) condemns the physical assault and threats against TV journalist Abdulaziz Billow Ali and his cameraman Mohamed Ahmed Mohamed by an official from the Somali Prime Minister’s Office on eve of July 1st, 2019 in Mogadishu.

At 1pm local time on 01 July, 2019, inside the premises of the Prime Minister’s Office, Abdulaziz Billow Ali, Mogadishu-based correspondent for the China Global Television Network (CGTN) was physically assaulted, harassed, threatened and their camera equipment nearly broken down by the director of the Prime Minister’s Residence, Abdirahman Dirie known as “Goomey” after the journalist refused to record the director’s press statement on behalf of Prime Minister Hassan Ali Khaire, according to journalist Billow.

According to journalist Abdulaziz Billow and other journalists who saw the incident, the TV crew was recording Vox Pop clips about the 59th Anniversary of Somalia’s Independence Day when the director of the Prime Minister’s Residence, Mr Goomey interrupted and ordered the journalist to record his Independence Day statement which the crew turned down.

“When we explained about our program, he [the official] started to physically assault me by hitting me several times and tried to damage our camera,” journalist Abdulaziz Billow Ali told SJS  ” he told us ‘if you do not record my speech, you will no longer be able continue working here’ and ejected us from the facility by force and threatened to harm me and my crew should I return there again.”’

The TV crew left the premises without executing their journalistic duties after this official called members of the security soldiers and according to journalist Billow the situation could worsen should they not leave the premises immediately.

Somali Journalists Syndicate (SJS) condemns this assault against the journalists on duty by this senior government official from the office of the Somali prime minister. We call Somali Government to discipline and take appropriate action against this official for using violence and threats against an innocent journalist who carries out his duties.

“We call Somali government to uphold the press freedom and allow journalists to exercise their granted freedoms peacefully,” Abdalle Ahmed Mumin, Secretary General of the Somali Journalists Syndicate (SJS) said “Journalists have the right to execute their duties without fear or being harassed.”

On the night of 26 June, a soldier at Somali President’s security detail beat punched and kicked several times journalist Abdulkadir Ahmed Mohamed (alias Mo’alim) who works for Radio Voice of Banadir Regional Administration (BRA) at the premises of Banadir Regional Administration where the 59th Anniversary of the Independence Day celebrations took place. That officer was later arrested, according to the Director of Communications at the Office of the President, Abdinur Mohamed Ahmed.