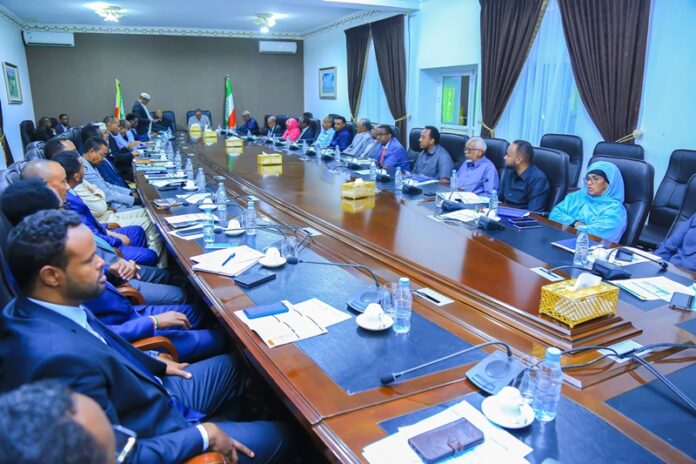 The 91st Cabinet meeting chaired by the President of the Republic of Somaliland, HE Muse Bihi Abdi, and accompanied by the Vice President of Somaliland, HE Abdirahman Abdillahi Ismail (Saylici), discussed issues related to preparations on the May 18th anniversary, relief & rebuild of wahen market, Security and Drought Issues in the Country.
The Minister of Interior, Hon. Mohamed Kahin Ahmed, highlighted the overall security situation in the country, noting that it is good, as preparations are underway for the 31st anniversary of the Republic of Somaliland on 18 May.

Hon. Kahin, who is also the chairperson of the organizing committee for the May 18th commemoration, presented to the cabinet a plan prepared by the national committee to celebrate the 31st anniversary of the Republic of Somaliland on May 18 this year 2022.

The Vice President of the Republic of Somaliland, and Chairman of the Drought Relief Committee, H.E. Abdirahman Abdillahi Ismail (Saylici) briefed the Council on the beginning of the spring rains in the country, noting that moderate rains have poured throughout in the country and the drought still pertains in the country.
H.E. Saylici, added, the drought relief committee will continue to respond, as there is still a need for food and nutrition for drought-affected livestock.

The Minister of Religion and Chairman of the Waheen Market Emergency and Support Committee, Sheikh Abdirizak Hussein Ali (Albani) briefed the council on the Waheen Market Emergency activities so far, including the registration of damage caused by the disaster of Waheen market fire, registration of traders in the market, total sum of the Waheen relief money that has been received the commission so far, adding, the funds are intended to be given to the victims of the fire and the reconstruction of Waheen market.

He noted that the committee plans to build a state-of-the-art market in line with international markets, in collaboration with engineers from the Ministry of Public Works, Housing and Lands along with Hargeisa Municipality Engineers and anyone with experience and expertise in the field.
.
The Council of Ministers called on all branches of government, both internal and external, and the people of Somaliland to prepare for the May 18th national day celebrations of the Republic of Somaliland, and called on the security agencies to strengthen security in the country.