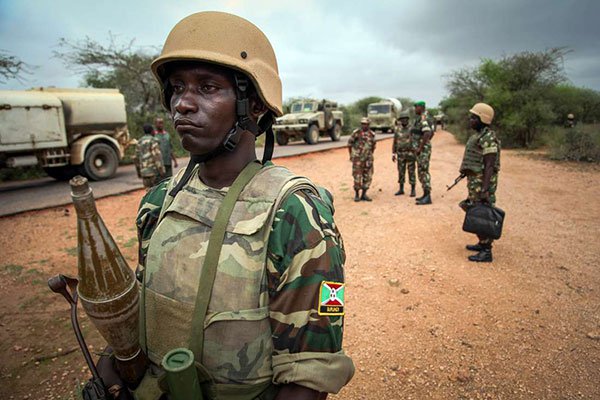 The planned withdrawal of a further 1,000 troops of the African Union Mission in Somalia (Amisom), has been thrown into confusion after a directive by the African Union’s Peace Support Operations Division (PSOD) that the soldiers come exclusively from the Burundian contingent in Johwar, Hirshabelle State, also known as Sector 5, was met with resistance from Bujumbura.

The withdrawal, to happen by February 28, was first directed by the United Nations Security Council in 2017, but Burundi has opposed the recent plan since it was declared last December.

According to Dieudonne Ndabarushimana, the Burundi ambassador to Ethiopia, the country has a valid argument against the withdrawal of its troops following its election as a member of the African Union Peace and Security Council on February 14 — on the sidelines of the recent 32nd Ordinary Session of the Assembly of the African Union in Addis Ababa.

The country is now expected to serve as a Peace and Security Council member for three years, a move that Bujumbura believes gives it good reason to push for the stay in the mission of its 1,000 troops.

Burundi had since early this month tried to lobby for the reversal of the troops withdrawal, and even sent its Foreign Affairs Minister Ezechiel Nigibigira to Egypt to meet President Abdel Fattah Al-Sisi, before he took over the chairmanship of the African Union from President Paul Kagame of Rwanda in Addis Ababa last week.

In making its case, Burundi is requesting that the Amisom troops be withdrawn on proportional basis from each of the five troop-contributing countries, as it happened when the first batch of 1,040 troops was withdrawn in December 2017.

Burundian troops in Amisom are a source of hard currency for the country, and the government receives $18 million from the AU quarterly, as compensation for the soldiers.

Amisom pays all soldiers $1,028 each per month, $200 of which is deducted by their respective governments for administrative costs.

Amisom spokesperson Col Richard Omwega however told The EastAfrican that the Peace Support Operations Division acted in line with the UN Resolution 2431 of 2017.

“The PSOD decisions are implemented by the Amisom force headquarters as directed without debate as per the structure of the military the world over,” said Col Omwega.

PSOD is acting under the new Amisom operations blueprint known as the Concept of Operations (CONOPs), which will see several forward operating bases reconfigured and others wound up as troop numbers are reduced.

CONOPs is part of the implementation of the Somalia Transition Plan, which involves reconfiguration of the forces into new sectors in preparation for final handover of security responsibility to Somali forces by 2021 when Amisom finally withdraws.

This latest withdrawal will affect Sector 5, the base of the Burundian troops. Ugandan troops are deployed in Sector 1.

Last December, Burundi army spokesman Biyereke Floribert argued that the decision to withdraw Burundian troops did not conform with the co-ordination committee of operations in Somalia which states that “the troops will be withdrawn from all the peacekeeping contributing countries. The Burundian army demands a competent authority to ensure that this decision is reconsidered,” he said.

The Somali government is also not comfortable with the planned phased withdrawal arguing that the Somalia National Army is not ready to take charge of the country’s security.

Kenya and Uganda are not keen either on leaving Somalia before the country is stabilised. Kenya, for instance, is concerned that a premature withdrawal could re-energise Al Shabaab.