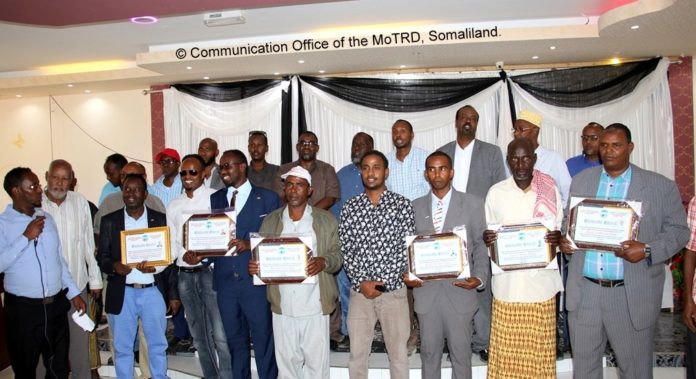 The  Roads Develipment AgencySomaliland  awarded five of its staff for diligence for the year 2019 in a ceremony held in Burao, the country second largest city.

Among the dignitaries present during the ceremony were the minister of transport, the managing director of Somaliland development Roads Agency, the governor of Togdheer region , mayor of Burao , traditional elders and other dignitaries.

Minister of Transport and Road Development Hon Abdulahi Abokor Osman who speaking at the event said that  the five workers were fairly selected by the technical committee for their diligence and honesty in executing their work.

“The roads development agency has more than 200 staffers tasked with building the Erigavo road project, some of them live and work in difficult conditions under the scorching sun, rains and spent nights in the cold and away from the families. All of them deserve to be acknowledged for efforts but today only five of them were selected for the awards ,” he said.

He added that the government of Somaliland will this year (2020) start construction works for the Burao airport, which was the first ever airport build in all Somali speaking regions by the colonial government in 1921, today Burao deserves to have an airport but due to technical and financial constraints the project was stalled and all efforts were direct towards building the Berbera airport which is used by the whole country but today we meet with the committee tasked with the implementation of the project  to discuss the way forward. Ten days ago , I met with the President of the Republic of Somaliland to discuss the project at Burao Airport, and we expect the project to start by 2020. ”

Finally, the minister said that the Somaliland development fund has allocated  funds worth $ 8 million for the Berbera-Burao road revamps, the work will start soon.