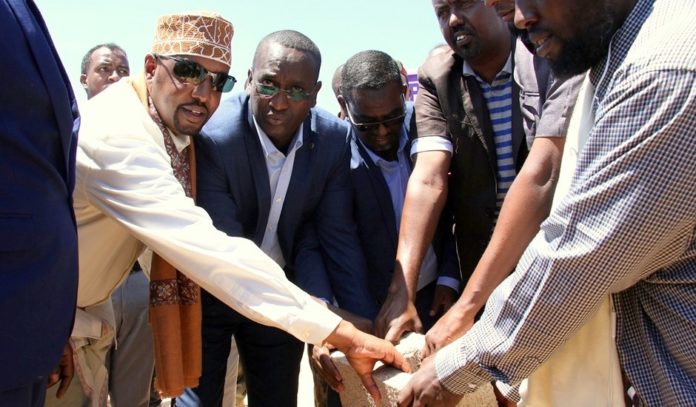 Minister of Transport and Road Development, Hon Abdillahi Abokor Osman on Tuesday officially presided over the groundbreaking ceremony for a new 32km highway linking the towns of Las Anod and Kalabaydh in Sool region.

local elders and intellectuals in the area who spoke on the occasion said that the road was important means of transport for the communities living in those areas, and would help alleviate the difficulties that people and vehicles now face on the road linking Las Anod and Kalabaydh towns and pledged that local residents will work hand in hand with government in building the road.

They also indicated that in the future, the road is intended to be a broader link between the Sool region of Somaliland and the Dollo region of eastern Ethiopia.

The Mayor of Las Anod speaking during the groundbreaking ceremony said, “On behalf of myself and the people of the Las Anod District, it is a pleasure for us to build a road here that connects Kalabaydh and Las Anod district, which is 32km long, and God willing the road construction work will start, and I hope the minister of roads will return here soon to cut the Rippon for the new road upon the completion of the construction work. The Las Anod Municipal council is committed to pulling all its resources in terms of financial contributions and equipment for building the road.

The governor of Sool region speaking during the groundbreaking ceremony said, “ I would like to thank the local elders and the community at large for the efforts and contributions towards the new roads, I say to the Minister of Transport, today you have witnessed the ongoing progress in terms of development in Sool region. “

Garaad Jama Garaad Ismail Duale,  a local traditional leader said, “ I am glad that we local community gather here today for the groundbreaking ceremony for the new 32 KM road that will connect Kalabaydh and Las Anod district, which Hon Abdillahi Abkor Osman, the Minister of Transport and Roads Development has laid the foundation stone.

Speaking on the occasion, the managing director of the Somaliland Road Development Agency, pledged that the government will play a major role in the construction of the road between Las Anod and Kaladhdh. We came here to lay the foundation for the road link’s the Kaladbaydh and Las Anod, and in the spirit of Allah, the community and the local people made the initiative to build the road and we ready to support you in the construction of the road.

Minister of Transport and Road Development, Hon Abdillahi Abokor Osman speaking during the groundbreaking event said “We are really honored, to gather here today with members of the community for the groundbreaking ceremony for the new 32km-long road. The Ministry of Transport and Somaliland Roads Development Agency works in accordance with the set yearly plan and most of our planning and research(visibility studies) are done at the end of the year.

“But after putting into consideration, and the fact it’ s the first time the communities living in Sool region have pledged to contribute towards the development project through their own initiative, we have decided to include it in our 2020 ministerial plan and as the managing director of Somaliland Roads Development earlier stated that we are ready to assist you the community by providing the know-how, and the funds needed”, the Minister of Transport.