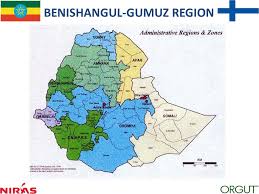 Benishangul-Gumuz borders the Amhara region, where authorities foiled a deadly attempt to oust the regional government on Saturday. Three officials, including the region’s president, were killed in that attack.

The attackers returned to Amhara after the assault in which 18 others were wounded, he said.

Authorities said Monday the general who led the attempted coup in Amhara was killed in a firefight.

An internet shutdown remains in force following Saturday’s violence, which included the assassination of the national army chief by his bodyguard in the capital, Addis Ababa.

Ethiopia’s prime minister has ordered a crackdown in which hundreds are believed to be in detention. On Tuesday he sobbed at a service in Addis Ababa for the slain army chief, who was killed along with a retired army general.

The unrest is the latest challenge to Abiy, who was elected last year as reformist.

He has been pushing through reforms, including making peace with neighbor Ethiopia and freeing many political prisoners – that have captured the imagination of many Ethiopians.

The killings in Addis Ababa and Amhara are “a blow to Abiy’s democratization agenda and may well worsen Ethiopia’s political and security crisis if key issues are not urgently tackled,” according to William Davison, senior analyst on Ethiopia for the International Crisis Group