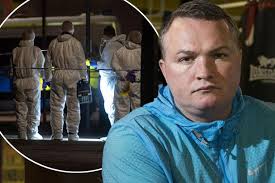 A CRACK cocaine gang battling for control of Edinburgh’s drug market may have been involved in the shooting of Bradley Welsh, it is feared.

As detectives issued a description of the suspected hitman, police sources said they “cannot rule out” the possibility that violent thugs formerly based in England – who have already killed once in the Capital – may have struck again.

Some insiders believe there is no link to the shooting of Welsh, 48, on the steps of his West End home, and Glasgow’s organised crime groups.

Instead, they believe the gunman – who blasted Welsh in the head at point-blank range on Wednesday evening – may have been acting on the orders of a Somalian drug gang operating in Edinburgh, Fife, Glasgow and elsewhere across the country.

One senior officer said: “Everyone is saying the shooter was from this gang or that gang, suggesting big names in Glasgow as being behind it. Most of it is sheer speculation. It’s also speculative to suggest it is the Somalians, but they do have previous for use of firearms and extreme violence in Edinburgh. It was not that long ago they gunned a man down in the street. It is something, at this stage, that simply cannot be ruled out.”

In 2013, Mohammed Abdi was blasted in the chest in Duddingston by rival crack dealers from Somalia, eventually leading to four men being jailed for life.

The source added: “They have been active in Scotland, particularly Edinburgh, for a while now and are no strangers to firearms. A sub-machine pistol was used in the Abdi murder.”

But detectives have also not ruled out a link between Welsh’s death and his known associates, including jailed drugs baron Mark Richardson.

Richardson, 32, is serving eight years and nine months for his role in an organised crime gang which flooded Scotland with guns and drugs.

They also kidnapped, tortured and attempted to murder a former associate accused of owing cash.

The nine-strong gang was jailed for 87 years at the High Court in Glasgow in January 2018 and Richardson – who was caught with a Glock semi-automatic pistol – has been accused of running his empire from behind bars through associates like Welsh.

Police Scotland confirmed he was approached by a man on the steps of his Chester Street property and fatally shot.

The gunman, who fired once and made off along Walker Street is described as being 20 to 30 years old, between 5ft 10ins and 6ft tall with a slim build and tanned complexion. He was wearing a baseball cap and was casually dressed.

Detective Superintendent Allan Burton from the Major Investigation Team said: “Someone out there will know who committed this crime and I want you to search your conscience and do the right thing. A family are grieving for the loss of their son, brother, partner and father and they need answers.

“If you can help with this investigation then please contact us immediately.”