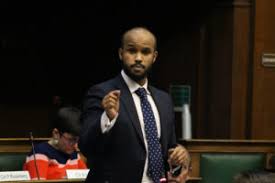 A YOUNG man told a public meeting that he had been “blocked” in his attempts to become a Labour councillor, as calls were made for the Somali community to be better represented.

Mubarak Deerow spoke out at a session held to discuss what had changed a year on from the Camden murders in February last year, which saw two young Somali teenagers die in stabbings on the same evening.

The deaths led to a community march and demands for more to be done to combat knife crime.

Mr Deerow had been one of the council’s youth councillors and wanted to become the adult equivalent, but told the meeting at the Somali Youth Development Resource Centre in King’s Cross that he was “blocked off through every avenue”.

He said: “A meeting I missed, I wasn’t allowed to rearrange. I got rejected at the age of 17 to stand as a councillor when I became 18, I got rejected. Political representation for young, black, male Muslims is limited in this borough, and that’s an issue.”

While Camden has seen several councillors with ties to Asian countries elected over the years, including those from the Bangladeshi community, the borough has only ever seen six black men and women win seats.

Awale Olad, first elected in 2010, is the only Somali councillor to win a place in the Town Hall chamber.

Mr Deerow, who has been a Labour Party member since he was 16, added: “I’ve addressed it with Awale extensively. He knows about my past, he knows for the past eight years I’ve been trying to become like him as a councillor, but I simply can’t attain that position.”

Camden’s Labour council leader, Georgia Gould, said: “I think the issue of representation is one that has come up throughout this conversation and there’s not enough Somali leadership across the borough. Not just in terms of political leadership but also in schools’ governors, our tenants movement, in positions of responsibility within the community and within our officer core as an organisation, and it’s something we have to take action on.”

She added: “I’ve been listening to Awale being the first Somali councillor for far too long because he still hasn’t been joined. “We’ve got three years until the next local election so there’s a real opportunity to build up our local leadership. We are committed to working with anyone in here who is interested in political leadership to do that but also more generally to take leadership in the community, and I think we should be pushing that.”

Cllr Olad, chairman of the culture and environment scrutiny committee, told the meeting earlier this month: “My job is to scrutinise what the council is doing. Therefore, I’m here to listen today to learn and see what I can in my role as a chair, as a Somali person within Camden and the only voice on the council to see how we can further our agenda and see what we can do to elevate us as a community.”