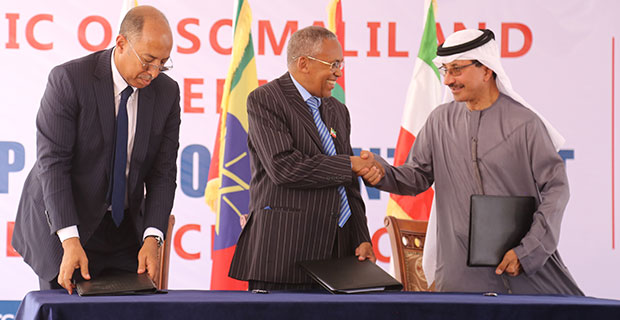 A Dubai-based company was hired to undertake the expansion development

Phase one construction work on the development of the Berbera Multi-Purpose Port has started with a ground-breaking ceremony held in Hargeisa without the presence of delegates from Ethiopia, which owns one fifth stake in the port.

The ceremony was held last Thursday in Somaliland, which has a 30pc equity. It was attended by Muse Bihi Abdi, president of the Republic of Somaliland, a self-declared state. The other shareholder, with a 51pc interest, is DP World. The port operator was represented by its Chairman and CEO, Sultan Ahmed bin Sulayem. Ethiopia’s flag was reportedly flown from inside the palace of the president, along with the flags of the United Arab Emirates and Somaliland.

The Ethiopian counterparts did not attend the ceremonies due to busy schedules, according to Somaliland’s president, Abdi.

“The Ethiopian officials were busy at home due to the ruling party’s congress,” Abdi told journalists last Thursday.

The first phase will consist of building a 400-metre quay and 250,000sqm yard extension, as well as the development of a free zone to create a new regional trading hub. It is expected to cost the developers 101 million dollars.

DP World Berbera, a joint venture company, will serve landlocked countries in the Horn of Africa such as Ethiopia, which ferries 13.5 million tonnes of imports and 1.8 million tonnes of export cargo annually through the port of Djibouti, representing nearly all trade shipments of the country.

The construction of the project was contracted to Shafa Al Nahda Contracting, a Dubai-based firm with  a long relationship with DP World. Established in 1982, Shafah has previously worked on the Port of Dakar expansion in Senegal and the Port of Maputo expansion project in Mozambique.

“The port is a huge benefit for Somaliland in developing its economy,” said Abdi.

The full expansion project will sit on an 800sqm area and be built in two phases. The first phase of the expansion is expected to enable the port facility to hold 150,000 containers. Upon completion of the second phase, the capacity of the port will be upgraded to serve seven to nine vessels, on average, at any given time. SRG, an Australia-based company established in 1961, will be the consultant on site for the expansion project.

“Investment in this natural deep-water port and the free zone will act as a catalyst for the growth of the country and the region’s economy,” remarked Sulayem during the signing ceremony.

The existing port facility has a 650-meter-long linear length wharf, encompassing more than 600qm designated as terminals for containers, general cargo, office buildings and other facilities. Somaliland Port Authority handles the customs and marine services, while DP World will administer the operations of the port after it won a 30-year concession in September 2016, which has an automatic 10-year extension.

The vessels served at the port will be arriving from Dubai, China, Oman, India and Yemen. It will also receive consignments of grains for humanitarian aid, assistance of the World Food Program and the United States Agency for International Development. The port currently serves 250 customers a day with an average container stay period of 6.5 days. Maersk Line, CMA CGM S.A, MSC, Pacific International Lines and Perma Shipping Lines are companies that ship containers to the port.

Somaliland is also considering developing a road connection linking Berbera to Togochale, a border town between Somaliland and Ethiopia. The road is expected to cost 90 million dollars with a partial investment from the according to Saad Ali Shire (PhD), Somaliland Minister of Foreign Affairs.

DP World has over 36,000 employees in 103 countries. It has a portfolio of 78 operating marine and inland terminals supported by 50 related businesses in 40 countries across six continents. In 2017, DP World handled 70.1 million twenty-foot equivalent units (TEU) across its portfolio.

During the agreement signing ceremony, officials of DP World disclosed their interest in developing a logistics facility in Dire Dawa.

Currently, DP World is in a tense situation with the government of Djibouti following the concession termination of the former on Doraleh Container Terminal (DCT). DP World took the case to the arbitration tribunal in London that ruled in favour of it, and the case is still pending.

Yeshi Fikade, communications director at Ethiopian Maritime Affairs Authority, told Fortunethat she had heard the construction launch from media.  spokesperson Office of the Ministry of Foreign Affairs did not respond to Fortune’s enquiry before the paper was sent to print.