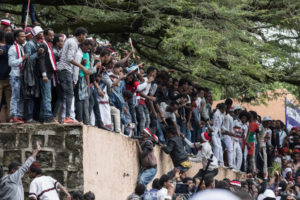 People protest against the Ethiopian government during Irreecha, the annual Oromo festival to celebrate the end of the rainy season, in Bishoftu on October 1 2017. (File photo)
Image: Zacharias Abubeker/AFP

At least 23 people were killed in a weekend of violence targeting minorities in the ethnic Oromo heartland near Ethiopia’s capital Addis Ababa, a police source said.

The unrest followed a mass rally on Saturday marking the return to Ethiopia of the leadership of the exiled Oromo Liberation Front (OLF) group, which had fought an insurgency for self-determination for Oromos, Ethiopia’s largest ethnic group.

The incidents are the latest in a spate of ethnic unrest, including the displacement of nearly 1m people in another part of the country, since reformist prime minister Abiy Ahmed came to power in April. He is the first Oromo ruler in ethnically diverse Ethiopia’s modern history.

Local residents said shops were looted and people attacked by Oromo youth who stormed through streets targeting businesses and homes of ethnic minorities. The violence escalated on Saturday after two days of sporadic attacks in several areas of the Oromiya region’s Burayu district, northwest of Addis Ababa, residents said.

“Mobs of ethnic Oromo youth then marched here in Ashwa Meda and attacked our homes and looted businesses chanting ‘leave our land’,” said Hassan Ibrahim, a trader in an ethnically diverse part of the district. “By night time, there were several dead bodies along the roads.”

Alemayehu Ejigu, head of Oromiya region’s police commission, said more than 70 people had been arrested and denied accusations that police were slow to respond.

“They (mobs) do not represent anyone – they had no reason other than theft. Anyone has the constitutional right to reside in Oromiya or anywhere.”