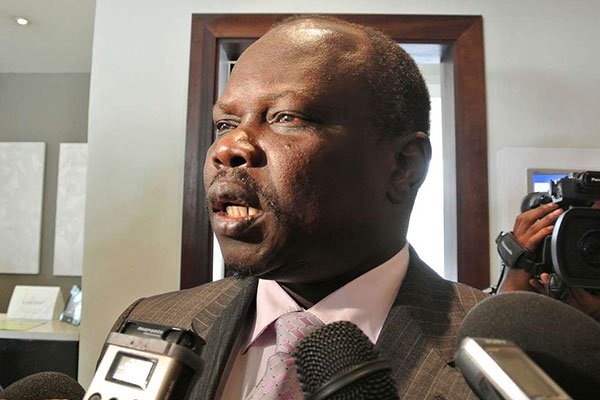 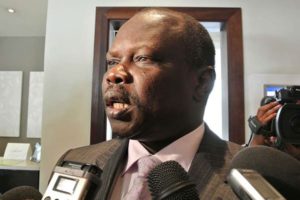 The South Sudanese opposition group of former detainees has disowned the peace deal between the Juba government and the rebels.

The South Sudan Opposition Alliance (SSOA) said in a statement that its negotiator, Mr Deng Alor, consented to the deal without the requisite consultations.

The sentiments run contrary to earlier reports that rebel leader Riek Machar had agreed to sign the peace agreement.

The Sudan Foreign ministry had confirmed that it had convinced Dr Machar to sign the agreement, adding that he would ink the accord on Thursday.

The SSOA statement, issued by Mr Pagan Amum, said the opposition regretted the initialling of the final text of the peace agreement by Mr Alor.

“We, the SPLM Leaders (Former Political Detainees – FDs) regret the initialling of the ‘final text’ of ARCSS by Cde Deng Alor Kuol as this has been done prematurely and without proper consultations, leaving many issues unresolved to become the bone of contention and seeds of future conflict,” it stated.

“We maintain the position that the outstanding issues that we had raised earlier on need to be resolved satisfactorily and reflected in the final text of the draft agreement before initialling. At this eleventh hour, we can no longer rely on vague assurances of initialling or signing documents with reservations or having points of disagreements bracketed or referred to other bodies for decision,” it stressed.

It said further: “We believe that to negotiate these outstanding issues during the stage of implementation will be a futile exercise.”

Khartoum said Tuesday that Dr Machar had agreed to sign a final peace deal with Juba to end a brutal civil war after initially refusing to do so.

Dr Machar and President Salva Kiir have held weeks of talks in Khartoum to end the conflict which has killed thousands of people and displaced millions of others since 2013 in the world’s youngest country.

The warring parties have already inked several agreements, including a permanent ceasefire and a power-sharing deal that sees Dr Machar returning as first vice-president in the government.

But earlier on Tuesday, in what was seen as a setback to ongoing peace efforts, Dr Machar refused to sign the deal even as Juba inked it.