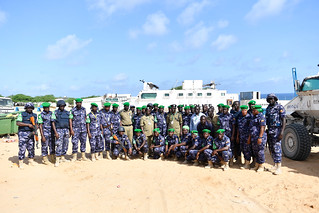 Mogadishu, 31 October 2019 – The Deputy Special Representative of the Chairperson of the African Union Commission for Somalia, Simon Mulongo, has lauded the professionalism of Ugandan police officers serving under the African Union Mission in Somalia (AMISOM).

Mulongo, on Wednesday, met the Director of Peace Support Operations in the Uganda Police Force, AIGP Grace Turyagumanawe, who was on a visit to assess the status of equipment and welfare of personnel.

He noted that the Uganda police contingent, which includes Formed Police personnel and Individual Police Officers, continue to be instrumental in AMISOM’s gains against terrorism.

“We are satisfied with Uganda Police’s contribution to peacebuilding, especially their contribution to maintain law and order and enhancing the capabilities of the Somali Police,” Mulongo told Turyagumanawe.

During the visit, Turyagumanawe inspected the condition of the contingent-owned equipment at the Jazeera Forward Operating Base outside Mogadishu.

Under the Somalia Transition Plan, AMISOM Police ensure that the Somali Police Force is adequately capacitated in preparation to assume full responsibility of maintaining law and order in the country when AMISOM leaves in 2021.

Uganda is one of AMISOM Police contributing countries. The other countries include Ghana, Kenya, Nigeria, Sierra Leone, and Zambia.

Turyagumanawe also revealed that plans are underway for Uganda to deploy more police personnel to serve under the AMISOM Formed Police Unit.

“Preparations are underway to ensure that we deploy a second formed unit as was agreed on recently. We are working on acquiring the necessary equipment,” added Turygumanawe.