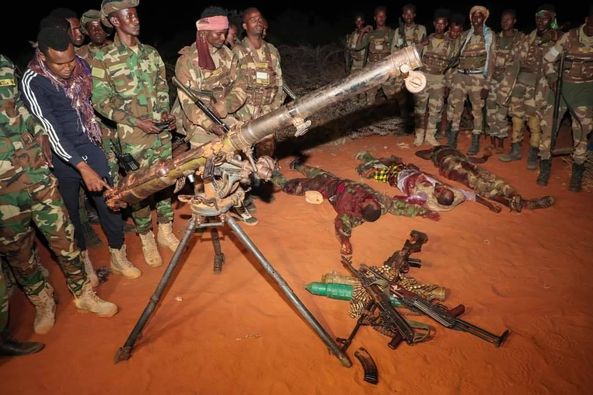 Al Shabab militants fired rockets and mortars into Dhusamareb, the administrative seat of Galmudug state for the second time running. Dhusamareb is currently hosting the consultative meeting between the Federal Govt of Somalia and Somalia’s Federal Member States so as to resolve the election impasse and reach a comprehensive deal that will pave the way for the presidential polls slated to happen in 2021. Senior Somali National Army officers have displayed cache of weapons including mortars and vehicles seized during clashes between Somali army and Al shabab militants that took place in Dhusamreb outskirts. Somali army said that it confiscated mortar that Al shabab used to launch the rocket barrage, light weapons and vehicles. The army also confirmed that at least 8 Al Shabab militants were killed who were responsible for the mortar raid targeting Dhusamareb.