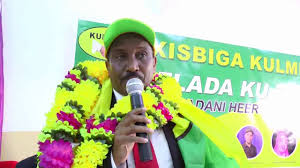 The Organizing Committee of the 4th Convention of ruling Kulmiye Party disqualified the minister of agriculture, Honorable Ahmed Mumin Seed from the leadership race.

The minister has paid up the 10, 000 US Dollar requirement for contesting the leadership posts of the party.

The reason for the minister’s elimination from the candidates vying for the leadership is that he was in the party less than five years.

It was one of the conditions that the candidates must fulfill in a bid to compete for the posts within the party.

Ahmed Mumin Seed has announced his bid to run for the 4th chairman of the party.

He was supposed to face a tough challenge from the Deputy President and the Minister of Trade who hail from Awdal region.