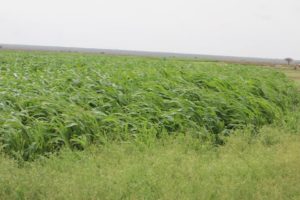 Somaliland was under British rule for 70 years. During the colonial period, there was no any significant development took place in agriculture. There was Department of Natural Resourse that managed agriculture, water supply and minerals. They hired young high school graduates and trained them as agricultural instructors to assist the farmers to set up bunds in their farms so as to retain water flow.
They brought a variety of sorghum called Elmi Jama which had marketable taste, but took 6 months to be harvested. The name Elmi Jama came from the farmer whose farm plot the seeds were multiplied.
In early 1950s, they brought grafted oranges from Natal South Africa and planted in Gade Dable, Arabsiyo, and Amoud. The orchards planted in these areas are still producing oranges though the yields are low. Climatically, the Region is an ideal place to grow oranges having 6 months cool followed by 6 months hot.
During civilian rule of 1960-1969, USDA implemented Water and Soil Conservation along the hills of Hargeisa District to reach all the way to Gabile and Borama Districts. There was also another project which German agency started in haahi in Odwene as farming cooperative in which group of nomadic people were settled as farmers.
While machinery services were provided by the Germans, the members of the cooperative were responsible for hand works. Both projects came to an end on the order of the Military Government.
The transfer of all agriculture Instructors to the South was impediment to the services they render to the farmers. Equally, the staff transferred from South were not trained in dry land farming and construction of bunds in the farm plots.
Currently, agricultural development works are in the hands of NGOs while the Ministry Agriculture is responsible for accountability.
In recent years, the Region suffers from severe climatical changes causing draughts that brought internal displacement of nomadic population seeking where they could find water and pasture for their animals.
Such situation has become pattern in every three years. If I take Awdal region as an example, the lush forest lands that existed disappeared. The only common tree type you see is Acacia (sogsog). Most of the trees with hard stems were cut for charcoal purposes. While those with soft stem could not resist periodical draught. There are no bushes that retain the
flow of rain water coming from the mountain water shades.
As a result, gullies are formed in areas where thriving farms existed.
Another phenomena that has impacts on agricultural development is that the traditional farmers are coming to cities to get better incomes for their families.
In Togwajale plain, sorghum, maize and wheat are produced when they have sufficient rain and they get good harvest. In mountainous areas where ground water is shallow and soils are fertile in the valleys, they grow oranges, papaya, and vegetables for the markets.
All in all, the main reasons of low agricultural production are the followings:
Shortage of trained agricultural agents who assist the farmers in better land preparation, supply of improved seeds, water retention technics, and informing the farmers the type of vegetables and fruits
they grow for the markets. There are high class hotels in major cities in the country that needs good quality fruits and vegetables.
Lack of machinery services for the farmers.
Lack of feeder roads in the areas where ground water is available.
There are no credit systems for the farmers.
At a time when no Agricultural Research Station in the country, the Haramaya University in Ethiopia had conducted extensive research which resulted improved
seeds of sorghum, maize, wheat and beans. It is imperative that the Ministry of Agriculture approached
the University to get such high yielding seeds.
Somaliland has competitive advantage to grow high quality oranges because of the ideal climate in the country. The first step to be done is to import grafted
Seedlings from countries growing high quality oranges such as Natal in South Africa, Florida, USA, and Oman.
Then, what ever quantities imported, it will be raised
In Seedling Mutiplication Center for a period of 6 months
and distributed to the farmers who have easy access to
water. It is necessary to train agricultural instructors
who provide advises how to grow the oranges, proper
use of fertilizes, insect sides and irrigation techniques.
Production of fruits takes 6-7 years and because of the accessibility of Arabian markets, fruits will bring hard
currency to the country. 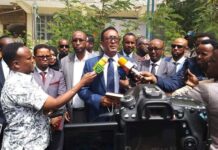 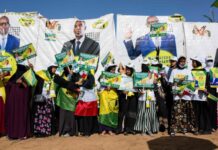