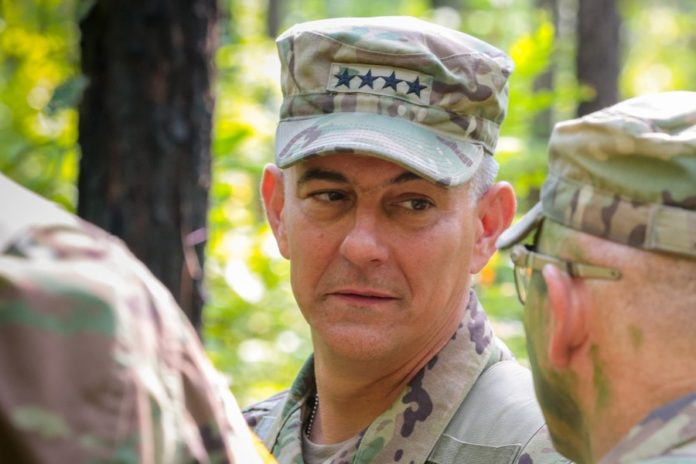 STUTTGART, Germany — Hours after taking charge of U.S. Africa Command Friday, Gen. Stephen J. Townsend, was at work assessing the state of operations on the continent where he now leads military efforts.

After a brief change of command reception at Stuttgart’s Patch Barracks, Townsend huddled with his top commanders. Next week, Townsend said he will make his first trip to East Africa, where the U.S. faces a complicated security situation in places like Somalia.

“I intend to very thoroughly assess everything the command does,” Townsend told Stars and Stripes.

Townsend replaced Gen. Thomas Waldhauser, who is set to retire after leading AFRICOM for three years in a tenure that saw a growing mission in Somalia, an air bombardment campaign in Libya and a deadly ambush of U.S. troops in Niger that jolted the military community.

“We honor the bravery, service and sacrifice of those American, African, and partner soldiers who have given their lives over the past three years in the noble pursuit of peace and security across the African continent,” Waldhauser said during the ceremony.

Townsend, who previously led the U.S. Army’s Training and Doctrine Command and, before that, headed the U.S.-led coalition that battled the Islamic State group in Iraq and Syria, takes over at AFRICOM at a tumultuous time.

In 2017, four U.S. soldiers were killed in the ambush in Niger that brought intense scrutiny and political attention on the U.S.’s role in Africa. The military also has picked up the pace of operations in Somalia, where it has conducted 46 airstrikes this year against forces aligned with al-Qaida and the Islamic State group.

As drone strikes have increased, accusations of civilian casualties also have begun to emerge. So far, AFRICOM has acknowledged that two civilians have been killed in a U.S. drone strike in 2018, but watchdog groups like Amnesty International earlier this year claimed the toll is higher.

When asked whether he intends to reassess how the military operates in Somalia, Townsend said he would, just as he will examine everything AFRICOM does. “I am comfortable with what the command has been doing (in Somalia), but as a new commander I am going to do what all commanders do,” Townsend said. “I am going to give my own look, my own assessment.”

Regarding questions from human rights groups about civilian casualties, Townsend said, “I understand their concerns.”

However, Townsend said the military conducts airstrikes in a careful way and takes measures to avoid civilian deaths whenever possible. As head of the U.S. coalition against ISIS, Townsend oversaw a massive air campaign against militants in Iraq and Syria.

“These things are a part of conflict. It’s unfortunate, but they are,” Townsend said.

In Somalia, AFRICOM leaders say they have seen important progress over the past couple years. The Somali military has been growing and taking on a larger role against the insurgent group Al-Shabab and the central government has become more capable, military officials say.

“These gains in Somalia are extremely fragile,” Waldhauser said. “But they are gains nonetheless.”

AFRICOM is adapting to a new Pentagon strategy that calls for greater focus on countering Russia and China in Africa, where both countries have sought to gain influence. China, in particular, now operates a base in Djibouti near the U.S. military’s hub at Camp Lemonnier.

Townsend also faces the challenge of keeping pressure on militant groups, while working to keep Russian and Chinese influence in Africa in check. Without naming China or Russia, Townsend said, “We will continue to counter corrosive influence on the African continent, whatever those corrosive influences may be.”

Although the command posting in Stuttgart is Townsend’s first military assignment in Germany, it marks something of a homecoming for him as he grew up on bases in the country as part of an Army family.

“This is an incredible assignment,” Townsend said.