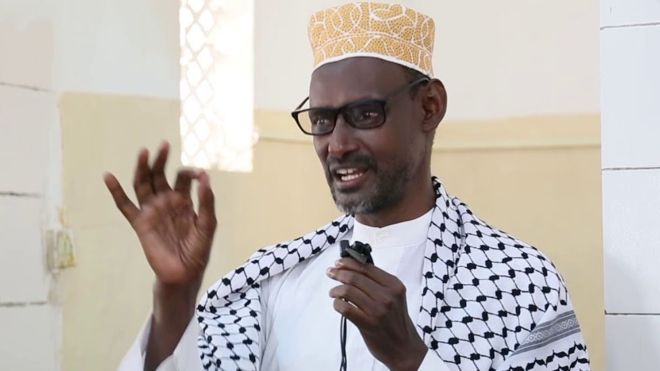 The Imam in a Mogadishu mosque discusses current affairs; he touched on the political fight between Donald Trump and Ilhan Omar, a Somali-born US Congresswoman, the Somalia,-Kenya maritime dispute and relations between the federal and regional governments, among others.

Stories matter. People make sense of the world through stories and shape up how we understand it.

Somalia requires new stories, but people will listen when they themselves are included in the story-line.

An Imam at a mosque in Somalia’s capital, Mogadishu, is doing exactly that, offering a new narrative to show what is possible. Sheikh Abdi Hayi is shifting gears and is bringing new ways of telling stories in an unlikely place: a mosque.

Sheikh Abdi Hayi, a brown taqiyah atop his head, white and black-dotted turban draped over his shoulders, and in a white thobe, captivates his audience.

Somalis are now giving more attention to his sermons than they would a politician’s speech. The difference between the two is obvious – Abdi’s’s is entertaining and informative. Politicians focus on how their clans could capture power in the next elections.

For the last three decades, politicians have failed to change the country and get it out of a 30-year-old mess.

Somalia’s problems cannot be solved by doing more of the same. New narratives like that of Sheikh Abdi’s are needed – connecting people’s motivations and promoting radical actions.

Sheikh Abdi focuses on social, cultural and political issues as well as current affairs in his Friday summons, using ‘once upon a time’ tales from pre-television and social media days, and uses examples from the Koran and Hadith – the sayings of Prophet Muhammad, peace be upon on him.

“I discuss what people think are important in their lives and what interest them. You can guide people in the mosque, this should be the place to discuss what matters to people, it could also be a rehabilitation centre,” he says.

In one of his summons, the Imam discussed relations between the federal and regional governments, and the latter’s opposition to the government in Mogadishu.

“These state governments you see are not what they seem to be. It is tribal governments,” he says.

Somalia has five state governments, created under the country’s federal system, each maintaining their own police and security forces which have a degree of autonomy over their affairs, but are subject to the authority of the federal government.

Sheikh Abdi urges Somalis to abandon clannism and work toward one Somalia.

“Our sister Ilhan Omar is fighting US President Donald Trump. Ilahn and Trump are at the same level. The US Constitution protects both of them,” he told a congregation at a mosque in Mogadishu.

“Ours is a system that no one understands. We do not have a clear path to follow. Why can’t we agree on a system that will guide us?”

Our system is like a person suffering from malaria and continues to take paracetamol drugs to relieve pain and reduce fever instead of going to see a doctor to seek medical care to eradicate the disease from his body, he says.

Although gains were made in the last few years, Somalia’s central government is still weak and wrangles between itself and the regional governments are a factor slowing down further progress.

Sheikh Abdi’s stories are now inspiring Somali communities around the world and they are being shared across dinner tables and mobile phone screens.